June 2012 – IK Multimedia is proud to release AmpliTube® Slash, the official Slash apps and software that let you play, practice and record with Slash’s signature pedals and amplifiers on the iPhone®, iPod touch®, iPad® and Mac®/PC. 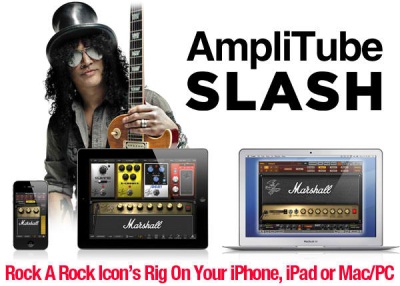 All versions of AmpliTube Slash feature models of the signature gear used by Slash in the studio and for his live performances. Now users can rock with models of the legendary Marshall® amplifiers used by Slash together with his signature guitar pedals. Also included is a comprehensive collection of Slash’s guitar tone settings provided as starting points for tone tweaking or playing along.

Additionally AmpliTube Slash provides a fully integrated multi-track recording studio for capturing ideas quickly and easily or producing entire songs and compositions. A robust song player section gives users the ability to play along with songs or backing tracks by importing them directly from their device library or computer.

“My new album, Apocalyptic Love, was entirely written while we were on tour,” states Slash, adding, “If we are not performing we’re traveling, so there is little time for creating music. By using my iPhone along with IK’s AmpliTube and iRig I was able to capture whatever ideas I had swimming in my head, usually around 4am.”

“AmpliTube iRig comes in really handy for on-the-go practicing, recording, or just jamming on different ideas – even if it’s on the bus – it’s right with me all the time”, Slash adds, “I’ll do some tweaks on the Marshall’s, but there are also different effects that are available including distortion, chorus, auto wah and more.”

IK worked closely with Slash to model his entire rig comprised of 2 must-have classic rock amplifiers – the Marshall JCM Slash Edition Silver Jubilee and the Marshall AFD100 – both equipped with Slash’s favorite 1960 Marshall speaker cabinet. Together with these sought-after amplifiers users will be able to choose from 6 stompbox effects that includes Slash’s signature Delay, Gate, Octave/Fuzz, Chorus, Booster and Wah/Distortion.

The rig is fully configurable so that the signal chain can be freely customized depending upon the device used: 3 stompbox effects into an amp and cabinet on the iPhone/iPod touch; 4 stompbox effects and amp/cabinet/mic on the iPad, and up to 12 stompbox effect combinations into dual amp/cab/mic/room on the Mac/PC.

AmpliTube Slash is the latest addition to the family of official IK guitar and bass products that, thanks to IK’s unmatched modeling technologies, features products with the best names in guitar effects and amplification such as Fender™, Ampeg®, Orange®, Soldano™, Seymour Duncan™, T-Rex® as well as legendary artist Jimi Hendrix™.

Hook up with Slash:

AmpliTube Slash for iPhone and iPad are now available from the App Store™ now at an introductory price of $9.99/€7.99.

Existing users of AmpliTube for iPhone, iPod touch or iPad can purchase AmpliTube Slash as an in-app purchase for $9.99/€7.99, or individual models a la carte starting at $2.99/€1.99. 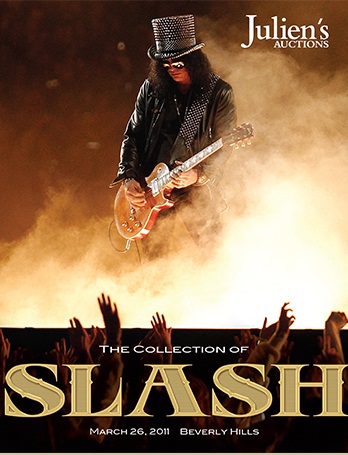 In the heart of Beverly Hills Julien’s Auctions will host an auction of Legendary proportions. A sale of just under two hundred items that spans rock n roll history with property from the life and careers of musicians Bo Diddley, Bob Dylan, Jimi Hendrix, Tom Fogerty, Madonna, Prince, The Beatles, Elvis Presley, Michael Jackson and many others.

Highlights include: Prince’s Purple Rain sunglasses, jackets given by Prince to a girlfriend, Tom and John Fogerty’s childhood recording equipment, a letter Madonna wrote to David Letterman, The Jimi Hendrix Experience poster inscribed by the band in 1969, a rare poster advertising a 1963 concert by The Beatles and Michael Jackson’s personal MTV Moonman trophy.

Property From the Collection of Slash

On Saturday, March 26, 2011, Julien’s Auctions will partner with legendary guitarist and musician Slash to offer items from Slash’s personal collection at auction. For the first time ever Slash has authorized the sale of guitars, clothing, jewelry, furniture and décor from his home and other personal items.

Highlights from this sale include two versions of Slash’s Gibson signature guitars, stage and event worn T-shirts, Slash’s diamond encrusted guitar pendent, a pair of monumental red suede conversion sofas from Slash’s home, Slash’s Harley, 1966 corvette, and other eclectic items from Slash’s travels around the world. From Guns N’ Roses early days, through the formation of Velvet Revolver to Slash’s solo career — every period of Slash’s career is represented in over 300 items.

The items can be viewed at Julien’s Auctions showroom in Beverly Hills at 9665 Wilshire Boulevard from 10am to 5pm Monday through Saturday starting Monday March 7th through Saturday, March 26th.

A portion of the proceeds from this sale will benefit one of Slash’s favorite charities, Los Angeles Youth Network (LAYN). LAYN works to empower abused, neglected and homeless adolescents to become self-sufficient. More information about this organization can be found at www.layn.org. 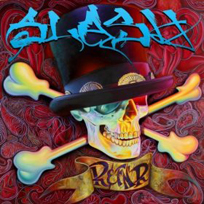 Last week I posted about the New Slash CD.

Today the ENTIRE CD showed up online on the AOL web site in the “CD Listening Party” section.

I’m not sure how long it will be there so get to the party as quick as you can!!

This is a follow-up to yesterdays post about the new album coming from Slash.

Check out these 2 videos – 12 minutes of studio footage: 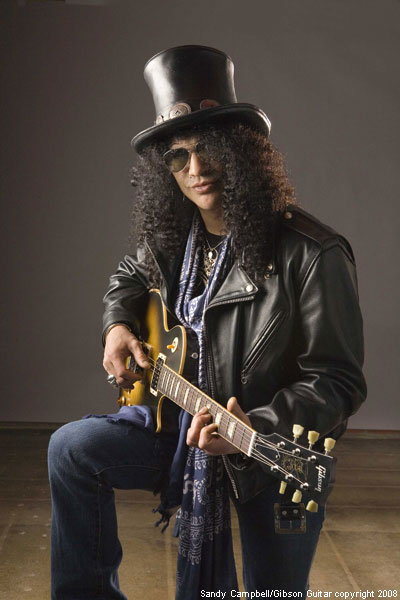 Slash is widely considered one of the greatest rock guitar players of all time. He has received countless accolades and awards including a 2007 star on the Hollywood Walk of Fame alongside his idols Jimmy Page and Jimi Hendrix.

How’s that for a list of jam buddies to call on!

“The idea was really simple in the beginning,” said Slash. “These are all artists I wanted to work with – that I thought it would be amazing to do something creative and collaborative. And I was so impressed with what everyone brought to the table for the project. They were all so committed to doing a good job. And we had a lot of fun making these songs.” Slash did the bulk of the songwriting and handpicked the guest artist for each track.

“Slash” was produced by Eric Valentine and was completed with the rhythm section of bassist Chris Chaney (Jane’s Addiction) and drummer Josh Freese (Nine Inch Nails).

The album will be released through EMI Label Services.

01. Ghost (with Ian Astbury)
02. Beautiful Dangerous (with Fergie)
03. Nothing To Say (with M Shadows of Avenged Sevenfold)
04. Crucify The Dead (with Ozzy Osbourne)
05. Promise (with Chris Cornell)
06. By The Sword (with Andrew Stockdale of Wolfmother)
07. Doctor Alibi (with Lemmy Kilmeister)
08. Saint Is A Sinner Too (with Rocco De Luca)
09. Watch This (with Dave Grohl/Duff McKagan)
10. I Hold On (with Kid Rock)
11. Gotten (with Adam Levine)
12. We’re All Gonna Die (with Iggy Pop)
13. Starlight (with Myles Kennedy)

[Click the Arrow to play “Starlight” by Slash with Myles Kennedy”]

The new release is available for pre-order now at Amazon.com and on iTunes.