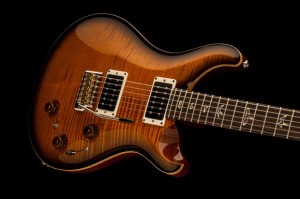 The solidbody piezo-equipped P22 Trem is essentially two guitars in one, providing the same classic humbucker tones and authentic acoustic sounds as the original P22 now with the added versatility of PRS’ prized tremolo bridge.

The P22 Trem’s voicing, EQ, layout and feel as well as the redesigned PRS/LR Baggs piezo board are all maintained in this trem-equipped model, and the materials and design of the bridge have also been upheld without sacrificing any proprietary specifications.

There are two output jacks on the P22 Trem, allowing guitarists to plug into their favorite electric or acoustic guitar amp or DI into a soundboard. By utilizing the separate blend control, the tone of the P22 Trem’s 57/08 pickups can also be combined with acoustic sounds through a single output.

Starting with the tried-and-true combination of a figured maple top, a mahogany back and neck and a rosewood fretboard, the P22 Trem looks as good as it sounds. For more information and to watch a demo video, visit www.prsguitars.com/p22trem.

For more about PRS Guitar, head to prsguitars.com.

On January 16th, a 13 foot steel, glass, and bronze replica of a PRS SANTANA signature guitar was unveiled in front of House of Blues Las Vegas in Mandalay Bay Resort & Casino in honor of The House of Blues first resident Carlos Santana. The statue was created by premiere American artist and innovator Dale Evers. This immense sculpture is entitled “Wings of Legend.” It represents the tens of millions guitars that have become an intrinsic part of American pop-culture and pays homage to the artistry of Santana and his relationship with PRS guitars. 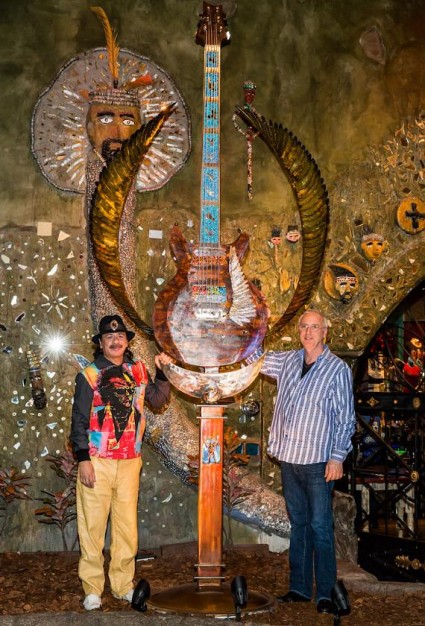 “The sculpture truly embodies the magnificence that is Carlos Santana,” says Artist Dale Evers. “It is an understatement to say I am honored and greatly appreciative for this grand moment in my life.” Evers’ unmistakable signature is characterized by a masterful fusing of glass, bronze and steel into creative realities. His numerous commissions have lead to permanent installations throughout the US and Mexico.

House of Blues Las Vegas General Manager Andrew Economon said, “House of Blues has been a wonderful home for music fans and performers ever since the first House of Blues opened 20 years ago, and a major part of the entertainment landscape in Las Vegas for the past 13 years. Our Vegas House of Blues in particular, has always been a favorite venue for locals and a big part of what we do here is about community and serving our community. That’s something we look forward to doing for another 20 years.”

For more than forty years and as many albums later, Carlos Santana has sold more than 90 million records and reached more than 100 million fans at concerts worldwide. To date, Santana has won ten Grammy® Awards, including a record-tying nine for a single project, 1999’s Supernatural (including Album of the Year and Record of the Year for “Smooth”). In 1998, the group was ushered into the Rock and Roll Hall of Fame, whose web page on their induction notes, “Guitarist Carlos Santana is one of rock’s true virtuosos and guiding lights.”

Are you a Carlos Santana fan?