The resurrection of the Joe Walsh Guitar Face post was trending popular yesterday so I spent some time looking for another artist being “caught in the moment”.

Here is a great one from Prince.

If you have any “Guitar Face” photos you would like to submit for future posts, email them to DJ@GuitarDaddy.com. 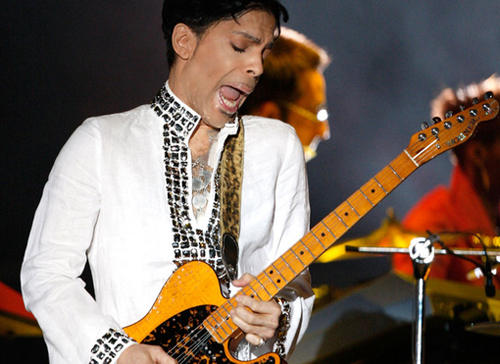 Say what you want…Prince is amazing.

He’s the consummate rock star and a flipping stud with a Telecaster.

He appeared on the George Lopez show and talked about a variety of things… from his vegetarian lifestyle to the internet and it’s affect on the music industry to selling his guitar for $100,000.00 to Formula 1 racing champion Lewis Hamilton in a charity fundraiser.

But Prince is Prince, so don’t expect him to show up on a TV show and just sit on a couch for an interview without taking the time to rivet the audience with an electrifying performance – as only Prince can.

From his over-the-top walk-on entrance to the Tele-Twisting finish… ladies and gentlemen…this is Prince.