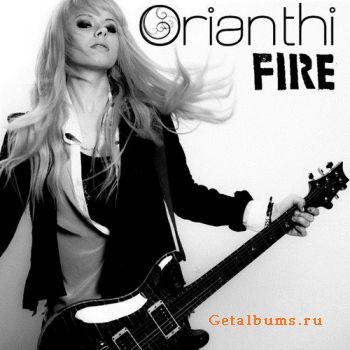 For the life of me, I can’t figure out why this girl doesn’t get more air time kudos.

But then again…maybe I can.

I had to search 10 minutes on Google to find anything about it, there were no reviews anywhere and then I noticed that the Press Release and the album cover are not even on her official web site! And when I found the CD on iTunes, the track names were all messed up!

What’s up with that?

I first wrote about Orianthi back in 2009 when I posted her inspirational story: “Start Young, Work Hard, Find A Mentor and Never Quit!”  Well now I have some advice for Orianthi…”Start Now, Find and Agent, Find a PR Company, and Put Them to Work!”

You are so much better than the world knows!

Check out the title track from FIRE:

This week, on October 28th, “THIS IS IT” will open in theaters across America.

The movie will offer Michael Jackson fans and music lovers worldwide a rare, behind-the-scenes look at the performer as he developed, created and rehearsed for his sold-out concerts that would have taken place beginning this summer in London’s O2 Arena. Chronicling the months from April through June, 2009, the film is drawn from more than one hundred hours of behind-the-scenes footage, featuring Jackson rehearsing a number of his songs for the show. Audiences will be given a privileged and private look at the singer, dancer, filmmaker, architect, and genius as he creates and perfects his final show.

Back on September 8th, I wrote a post about Orianthi Panagaris, the talented guitarist who was scheduled to play with Michael Jackson on his upcoming tour. If you missed that post, you can read it by CLICKING HERE.

CNN recently posted this video of Orianthi sharing her thoughts about the upcoming movie, and the late, great “King of Pop”.

I just finished dinner with my 11-year-old daughter.

During that dinner we watched President Barack Obama’s speech to America’s youth. This is not a political blog (and that was not a political speech) but just in case you missed it… I will provide a link: CLICK HERE.

What that speech prompted me to do (as a 52-year old man) was to sit down with my 11-year-old daughter and remind her that her opportunities are endless… as long as she starts now, works hard, finds a mentor and never quits. While all of her dreams may not come true, none of them will ever come true without a commitment to the cause and a sincere dedication to learn and apply the knowledge she acquires along the way. Above all, quitting is not an option!

Case in point: Orianthi Panagaris, the young female guitar-playing superstar to the left that Carlos Santana called “the one he will pass the baton to” and the same young lady who practiced on stage with Michael Jackson the night before his tragic death.

Orianthi Panagaris or “Orianthi” was born on January 22, 1985 in Adelaide, Australia.  She learned to play the acoustic guitar at age 6, started playing electric when she was just 11 and started writing songs and performing at the mature age of 15.

Orianthi had the opportunity to meet Carlos Santana when she was 18 in her hometown. Carlos invited Orianthi to get up and jam with him during the soundcheck then asked if she would join him on stage later that night.

She has played with Prince and toured with Steve Vai.  She played at the Eric Clapton Crossroads Guitar Festival and also appeared at the 51st annual Grammys with Carrie Underwood where she was Underwood’s lead guitar player.

Not bad for a young girl who picked up a guitar at a young age, worked hard, found a mentor and never quit.

Check out what Carlos Santana had to say, then watch this girl rip it up on her PRS: