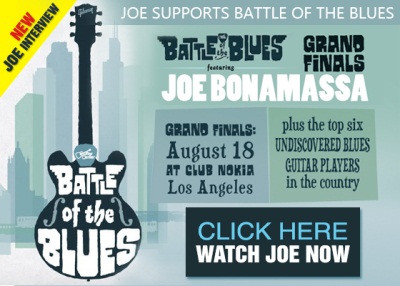 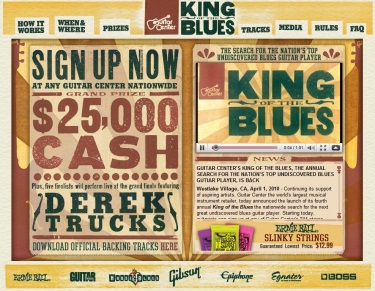 The King of the Blues finals were held at the House of Blues on September 2nd in Los Angeles where the stage was shared with world-renowned guitarist Derek Trucks, leader of the Grammy Award-winning Derek Trucks Band and member of The Allman Brothers Band.

Trucks’ extensive list of accolades and accomplishments includes being tapped by Eric Clapton to join the guitar legend’s 2006/07 world tour as a featured soloist and appearing on the cover of Rolling Stone’s “New Guitar Gods” issue, as well as being the youngest musician to make the magazine’s “100 Greatest Guitar Players of All Time.”

GUITAR CENTER’S KING OF THE BLUES, THE ANNUAL SEARCH FOR THE NATION’S TOP UNDISCOVERED BLUES GUTIAR PLAYER, IS BACK

Continuing its support of aspiring artists, Guitar Center the world’s largest musical instrument retailer, announced the launch of its fourth annual King of the Blues — the nationwide search for the next great undiscovered blues guitar player.

Guitarists can sign-up at any of Guitar Center’s 214 stores across the country for the chance to compete for thousands of dollars in prizes and the opportunity to perform at the King of the Blues finals at the House of Blues in Los Angeles, and play on the same stage as Grammy Award-winning guitarist Derek Trucks. All store, district and regional finalists will win impressive prize packages including top gear from Gibson, Epiphone, Ernie Ball, Egnater and Boss. The guitarist crowned Guitar Center’s King of the Blues will receive $25,000 cash, endorsement deals form Gibson, Ernie Ball, Boss, and Egnater and more!

Local competitions will be held at each of the 214 Guitar Center locations nationwide, beginning May 13th. Each contestant will be required to give a live guitar solo, performed over one of thirty original backing tracks, developed by Grammy Award-winning producer/guitarist, Pete Anderson.
END_OF_DOCUMENT_TOKEN_TO_BE_REPLACED

Last week, Guitar Center held the finals of their “King of the Blues” contest at the House of Blues in Hollywood CA. Congratulations to Kirby Kelley of Sherman, Texas who beat out more than 4,000 guitarists to be crowned the winner!

Following the contestants’ performances was an electrifying performance by Joe Bonamassa, who invited many of the judges to join him throughout the evening during his full concert set.

GuitarBuzz readers know that I am a HUGE fan of Joe Bonamassa. I also admire and have a ton of respect for Steve Lukather. Steve impressed me as a judge in the Guitar Player Magazine “GuitarSuperStar 2009” competition with his passion and direction as he addressed the final competitors. He continued that same line of mentoring at “King of the Blues”.

What I noticed in these 2 videos was the different styles that Joe and Steve have when playing blues solos. If Joe played 300 notes, Steve played 3,000. Steve blistered the fretboard, Joe left it dripping with pure Mojo.

What a great night that must have been. Wish I could have been there!

By the way, this is my 100th blog post to “TheGuitarBuzz” and I want to thank ALL of the readers, followers, commenters and supporters.  When I started this blog about a year ago, I doubt I could have come up with 100 things to write about. Now that I have the first 100 behind me, it’s on to the next 100… -GuitarDaddy

One last thing… I am trying to track down Kirby for an interview. Until I do, check out his winning performance on this video: