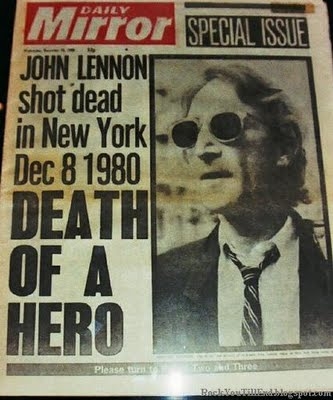 John Lennon was going into the studio later that day with Yoko Ono to work on her upcoming release “Walking on thin Ice”. It would be the last time he would ever enter the studio.

A man who lived in Hawaii had traveled to New York City with a mission on his mind. He was not going to give up until this mission was accomplished.

He would kill John Lennon.

At approximately 10:50pm, Mark David Chapman shot Lennon four times near the entrance of the Dakota apartment building. Earlier that evening, Lennon had autographed a copy of Double Fantasy for Chapman.

Lennon was taken to the emergency room of nearby Roosevelt Hospital but was pronounced dead on arrival.

Chapman pleaded guilty to second degree murder and was sentenced to 20 years to life. He remains in prison, having been repeatedly denied parole.

Lennon’s body was cremated and his ashes were kept by Yoko Ono.

CNN Posted a very interesting article about the place John Lennon was murdered, and how it haunts so many people to this day… CLICK HERE to read the full article.