Amplifier and effects models from Soldano, Ampeg and T-Rex are now available à la carte inside the new 2.6 version 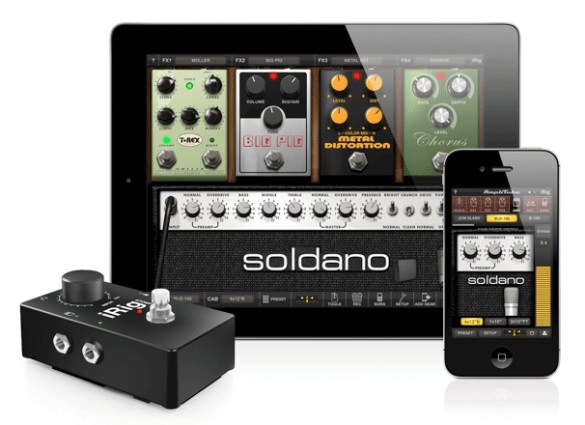 This special update includes the availability of 5 new gear models from some of the world’s top vintage and modern amplifier and effects manufacturers: Soldano®, Ampeg® and T-Rex®.

The release of AmpliTube 2.6 for iPhone/iPod touch/iPad coincides with the shipping of IK Multimedia’s newest mobile interface, iRig™ STOMP — a stompbox style mobile guitar interface (based upon the immensely popular iRig guitar interface adapter) – providing a stage-ready solution that can be integrated into a player’s pedalboard and connected directly to amplifier and PA systems.

On the amplifier side, AmpliTube 2.6 adds the incredibly powerful and solid voicing of the Soldano “Super Lead Overdrive” SLO-100 Watt head, one of the most celebrated boutique guitar heads of all time and the heart and soul of many rock, metal and electric blues player sounds since 1987. For that big round sound of Motown, AmpliTube 2.6 now offers to bass players the Ampeg B-15R Portaflex “Flip Top” model.

These models, combined with the huge selection of available gear from top-tier brands like Fender® and Rock & Roll Hall of Fame artist Slash, continue to elevate AmpliTube as the best-sounding premium guitar/bass tone and recording solution for mobile players.

With over 5 million downloads, AmpliTube sets the standard and is the leader for the portable guitar and recording studio app category. Existing users of AmpliTube for iPhone, iPod touch or iPad can purchase them as individual models a la carte starting at $2.99. For new users, AmpliTube 2.6 costs $19.99. An LE ($2.99/iPhone only) and a FREE version of AmpliTube 2.6 are also available with a limited set of gear models included. Connect iRig STOMP directly to your amplifier, or run a stereo pair out to your PA system. iRig STOMP – Step up to the next generation of mobile music making. iRig STOMP is the first stompbox guitar interface for iPhone, iPod touch and iPad.

For the first time, guitar and bass players can now integrate their favorite iOS signal processing apps into their existing live pedalboard setup for enhanced tone shaping and effects processing.

iRig STOMP is based on the wildly popular AmpliTube iRig interface and is compatible with any iOS guitar / amp / instrument app. With its compact, standard stompbox shape, iRig STOMP is packed with many smart features found here for the first time in an iOS audio accessory.

June 2012 – IK Multimedia is proud to release AmpliTube® Slash, the official Slash apps and software that let you play, practice and record with Slash’s signature pedals and amplifiers on the iPhone®, iPod touch®, iPad® and Mac®/PC.

All versions of AmpliTube Slash feature models of the signature gear used by Slash in the studio and for his live performances. Now users can rock with models of the legendary Marshall® amplifiers used by Slash together with his signature guitar pedals. Also included is a comprehensive collection of Slash’s guitar tone settings provided as starting points for tone tweaking or playing along.

Additionally AmpliTube Slash provides a fully integrated multi-track recording studio for capturing ideas quickly and easily or producing entire songs and compositions. A robust song player section gives users the ability to play along with songs or backing tracks by importing them directly from their device library or computer.

“My new album, Apocalyptic Love, was entirely written while we were on tour,” states Slash, adding, “If we are not performing we’re traveling, so there is little time for creating music. By using my iPhone along with IK’s AmpliTube and iRig I was able to capture whatever ideas I had swimming in my head, usually around 4am.”

“AmpliTube iRig comes in really handy for on-the-go practicing, recording, or just jamming on different ideas – even if it’s on the bus – it’s right with me all the time”, Slash adds, “I’ll do some tweaks on the Marshall’s, but there are also different effects that are available including distortion, chorus, auto wah and more.”

IK worked closely with Slash to model his entire rig comprised of 2 must-have classic rock amplifiers – the Marshall JCM Slash Edition Silver Jubilee and the Marshall AFD100 – both equipped with Slash’s favorite 1960 Marshall speaker cabinet. Together with these sought-after amplifiers users will be able to choose from 6 stompbox effects that includes Slash’s signature Delay, Gate, Octave/Fuzz, Chorus, Booster and Wah/Distortion.

The rig is fully configurable so that the signal chain can be freely customized depending upon the device used: 3 stompbox effects into an amp and cabinet on the iPhone/iPod touch; 4 stompbox effects and amp/cabinet/mic on the iPad, and up to 12 stompbox effect combinations into dual amp/cab/mic/room on the Mac/PC.

AmpliTube Slash is the latest addition to the family of official IK guitar and bass products that, thanks to IK’s unmatched modeling technologies, features products with the best names in guitar effects and amplification such as Fender™, Ampeg®, Orange®, Soldano™, Seymour Duncan™, T-Rex® as well as legendary artist Jimi Hendrix™.

Hook up with Slash:

AmpliTube Slash for iPhone and iPad are now available from the App Store™ now at an introductory price of $9.99/€7.99.

Existing users of AmpliTube for iPhone, iPod touch or iPad can purchase AmpliTube Slash as an in-app purchase for $9.99/€7.99, or individual models a la carte starting at $2.99/€1.99. 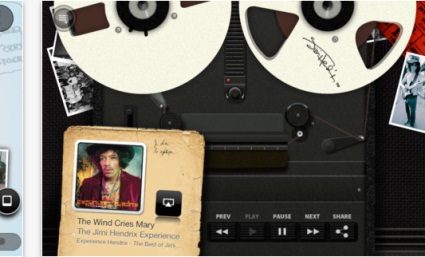 Does the sound of Purple Haze fire you up? Or does Foxey Lady have you playing air guitar to the classic riffs? Expertly made for the iPad, iPhone and iPod Touch in conjunction with Experience Hendrix LLC, this interactive app is the most innovative Jimi Hendrix experience available anywhere.

Jimi Hendrix changed the music world forever and inspired generations of fans with his music, lyrics and prose. Whether you are a lifelong fan, or new to his legacy, you can explore his vast library of music; dive into his full history, career and accomplishments through storytelling, images and videos; and relive some of his most famous concerts, venues and recordings as you pass by historic locations using the interactive map.

Check out the App and view more screen shots in the Apple Store by CLICKING HERE.

Last week, IK Multimedia released a major update to its AmpliTube for iPad app, highlighted by the addition of 8-track recording as well as the availability of new stompbox models.

AmpliTube 2 for iPad is a guitar and bass amp modeling program. Plug your instrument into the iPad with a special cable adapter called the “iRig” and you can tap into a range of amplifiers and effects to customize your tone.

AmpliTube 2 adds a the ability to record yourself playing (this feature was added to the iPhone version in October). A single track comes with the 2.0 update, with the option to expand the feature to an 8-track recorder. Each track features a button for enabling recording, an insert effect, controls for volume and pan, solo and mute switches, and two send-effect level controls to add ambience and depth with reverb, chorus, and delay from the master effects section. There’s also a global equalizer and compressor in the master effects section to tweak your final sound.

Other additions to AmpliTube 2 include the ability to import songs as backing tracks directly from the iPod library on your iPad or from a computer using file-sharing or Wi-Fi. A SpeedTrainer feature lets you slow down or speed up imported songs without affecting the music’s pitch-ideal for learning how to play particular passages of songs.

Check out this video that shows how you can use the multi-track recording feature to record a complete song with effects on your iPad!

The app costs $20 and includes a few basic effects and a single recording track. The iRig cable adapter is $40. Optionally, you can add the 8-Track recorder for $15 and several additional effect pedals for $3 each. If you buy the whole package you are in for less than the cost of a single stomp-box from Guitar Center and you have a full-on recording studio for your guitar. Personally, I think this is a steal of a deal!

Of course…there is the cost of the iPad…