By now you’ve probably heard what Billie Joe Armstrong did in Las Vegas…brutally smashing his Les Paul Junior after dropping thirty or so F-Bombs and dissing Justin Bieber on stage. 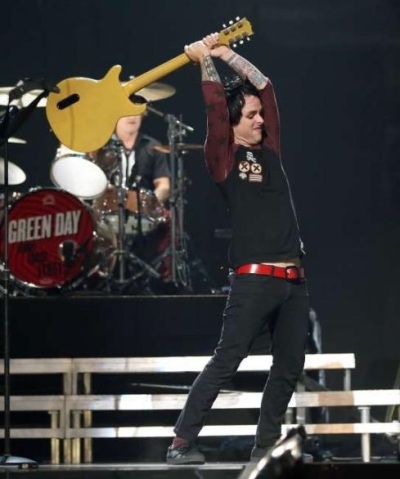 Forget the fact that the “one minute warning” to end the Green Day set was what ignited this outburst.

Forget the fact that many of the F-Laced comments were true… possibly even the ones about JB.

Forget the fact that the band has been playing for almost 20 years and has earned a significant right of entitlement.

I’m not here to judge whether or not Billy Joe’s outburst was warranted. I’m just saying this:

SMASHING A GUITAR IS SACRILEGIOUS.

“Sacrilegious” is defined as “grossly irreverant toward what is held to be sacred“.

And around my house, and around this blog, guitars are sacred.

I mean, come on. I come from a family where we reuse empty water bottles. We closely monitor the temperature setting of our thermostat. We hand down clothing to those less fortunate (like our younger children!) and every other day the dinner menu includes a few leftovers. Smashing a guitar? Destroying something sacred? Never in a million years.

I realize it makes for great stage presence. I realize it will brand that moment into your mind for a long time. I realize it’s what punk bands have been doing for decades. And I realize that the cost of that guitar to Billy Joe Armstrong was about the same as a box of generic brand Kleenex to me.

I’m not going to link the video to this post. Doing so would cause my blog to become R-rated. It’s pretty easy to find though…just click over to YouTube and search “Billy Joe Smashes” and you’ll find about dozen renditions.

Truth be known, I’ve wanted to smash my Gibson a few times too. But not for the reasons Billy Joe had. Mine are more related to having difficulty playing the F-Chord.

UPDATE… just a few short hours after posting this, the following news hits the wire:

Green Day’s Billie Joe Armstrong is seeking treatment for substance abuse,” their rep said in a statement Sunday. “Green Day would like everyone to know that their set was not cut short by Clear Channel and to apologize to those they offended at the iHeart Radio Festival in Las Vegas.”