GUITAR WORLD: You’re known as the man with the tone. When you’re on the road, how hard is it to keep your sound the way you want it, considering the different venues and halls?

EJ: It’s interesting; that’s the original reason I fell in the rabbit hole. I would play gigs where my guitar sound was really great and other nights when it was horrible. At the end of the day, it’s an X-factor, a mojo thing, like the wind. You can’t wrestle the wind into being your slave. It is what it is. We have to realize our limitations as humans and go with that universal flow. Then we can become bigger and better. If we try to do it ourselves, you just keep running into brick walls.

I think in the big sense, there is so much you can do to manipulate your sound…. [CLICK HERE] to read the rest in the interview… 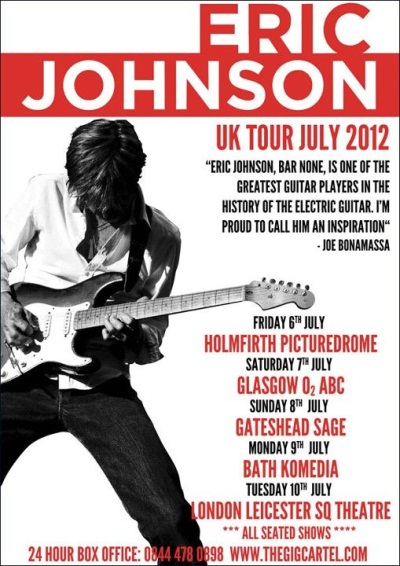 Eric Johnson, the celebrated American electric guitarist, hailed by Joe Bonamassa as “one of the greatest guitar players of all time,” will embark on his first UK tour at the ‘Holmfirth Picturedrome’ on Friday 5th July.

The 5-date mini tour will showcase material from his current album “Up Close”, as well as from his rich back catalogue.

Last Thursday I had the chance to see Eric Johnson on the first stop of his 2011 “UP CLOSE” Tour.

The only other time I have seen Eric Johnson play live was at the NAMM show a couple of years ago and I was anxious to see him again.

I have always been a fan of the man behind the “golden tone” and he did not disappoint me.

(Last December I wrote about the upcoming “UP CLOSE” CD.  Read it again by CLICKING HERE.)

Since the tour was named after the “UP CLOSE” CD, I assumed that much of the music would be from the CD and it was…with a few bonus tracks thrown in as well.

I know I got my twenty-two bucks worth and I know my concert buddy RWG did too. Our ears were ringing for several hours.

Today I came across this YouTube video of the 3 of them “gearing up” for the tour… ENJOY!

Eric Johnson has emerged with a new collection of tunes that gives anxious fans just what they want: great playing, great tone and a Texas-size dose of soul.

This is the first album that was recorded entirely in Johnson’s home studio (which was took Johnson 15 years to build). The sound of the record doesn’t come across as sterile as previous studio albums and the addition of some guests really adds to the looser vibe.

A great example is “Texas,” a medium-slow blues where Johnson shows off his Clapton-meets-Bloomfield licks alongside Steve Miller and longtime Austin friend Jimmie Vaughan. The juxtaposition of Johnson and Vaughan’s solos shows off how unique, and comfortable, each guitarist is with their style.

Throughout the 15 tracks on Up Close, from the Hendrixian-ballad “A Change Has Come to Me,” to the space boogie of “Fatdaddy,” Johnson has created another worthy addition to his already legendary catalog.

I picked up a new DVD from a desperate ebay seller…well worth the $15.00!

In this DVD, Eric shares his 10 “must know” musical concepts in an intimate one-on-one format in his recording studio.

Eric covers his unique perspectives on improvisation, chords, lead guitar, songwriting, and much more. The second part of the DVD features a full band performance as Eric, Chris Maresh (bass) and Tommy Taylor (drums) take you on a musical journey through eight never-heard-before songs! The fantastic audio and widescreen multi-camera visuals bring you right into the creative realm and mind of one of the world’s top guitar talents!

Here is a clip: