Regular readers of TheGuitarBuzz.com know that I am a long time follower of Ronnie Earl’s music. Ronnie is a no frills, no flash, passionate and soulful blues guitarist…one of the best I have ever had the opportunity to hear.

Ronnie Earl’s 20th release is available now from Stony Plain Records and “Spread the Love” qualifies as an all-instrumental religious experience in the blues.

Ronnie has the ability of a pentecostal evangelist to reach deep inside someone’s soul and move them emotionally. The difference is that he does it without saying or singing a single word. He does all of his “preaching” with the strings of his Stratocaster.

Ronnie resides in the Boston area and while he does not generally play venues that are more than a few hours from home, he still gets out and “Spreads The Love” by playing the message of the blues that’s ingrained into his soul.

And we are so blessed that he does.

Earl’s influences run parallel with many blues guitar aficionado’s — with the likes of Muddy Waters, Big Joe Turner and Otis Rush leading the way. “Spread the Love” includes a powerful step in the direction of Stevie Ray Vaughn, Albert Collins and Duane Allman. With that breadth of impression, “Spread the Love” is 14 tracks of instrumental blues that could double as a lifetime achievement award and a masterclass study — all in one.

Ronnie’s band “The Broadcasters” include: Dave Limina (Piano, Hammond B3), Jim Mouradian (Bass), Lorne Entress (Drums) and are as tight as you could imagine. Their execution is flawless.

It’s next to impossible to pick a favorite track. This is a 14-for-14 home run performance.

“Skyman” is Earl’s southern blues tribute to the memory of Duane Allman. “Backstroke” is Ronnie’s take on an Albert Collins cover that proves that the blues does not require over-playing or wasting notes. There is a just enough touch of jazzy blues on the cover of “Chitlin’s Con Carne” to make it fresh. “Blues for Donna” plays tribute to his loving wife and re-invents the phrase “slow blues” with eloquence. “Cristo Redentor” is the perfect example of a slow blues song where every note has a defined purpose and feeling. Remember, this is a masterclass study.

Ronnie Earl is one of my hero’s. He has conquered alcohol addiction, cocaine abuse and mental depression all throughout his brilliant musical career. While he is clean and sober today (for nearly 20 years) the life of addiction was hard on Ronnie.

I am convinced that there is a deep well of gladness and gratitude inside of Ronnie Earl, a spiritual source that he reaches for whenever he plays, whether it is at a concert, in the studio, at a church or at a local shelter. This endless reservoir of hope fuels his belief that things can always get better and that miracles can and do happen! -Rev. Deborah J. Blanchard

Ronnie is known for writing and dedicating songs to people who are important to him.  Some are by influence, many are in spirit and a select few are personal friends who stood by his side throughout the hardest times… like Tommy Hazeltine, Ronnie’s tour manager.  I met Tommy a couple of years ago before Ronnie’s concert at the Regent Theater in Arlington, MA, after I snuck into the building during Ronnie’s sound check (I really did!).  I explained to Tommy that I had traveled from Arizona to Boston to see Ronnie play live. Tommy made arrangements for me to meet Ronnie backstage — an encounter I will always remember.

The concert that night went well past midnight. I wonder if that was the origin to this song…

Bottom line, you can’t afford to miss this release!

Gibson.com is offering a free download from the new album by Larry Carlton and Takahiro “Tak” Matsumoto!

Three-time Grammy winner Larry Carlton and Tak Matsumoto, the most renowned guitarist in all of Asia, teamed up to compose, record and release “Take Your Pick”, an extraordinary collection of 12 original instrumentals already being hailed as “one of the most significant collaborations of contemporary guitar of all time.”

Note: This offer will not last forever… so get your free download NOW! 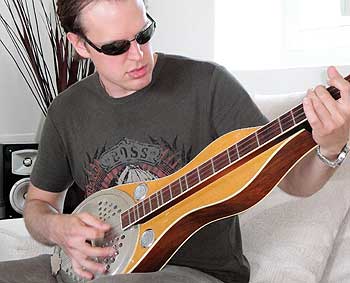 Produced by Kevin Shirley, the new material was recorded at Black Rock, a brand-new studio/villa in spectacular Santorini, Greece.

“This is our sixth project together,” Shirley says. “When we started recording together way back when, one of the tenets of our working relationship was that we were going to push the boundaries. I recognize where Joe’s roots are, but we were going to take the blues to different places. So over the years, we’ve gone swampy, we’ve gone eclectic; in our conversations, we’ve recognized that there are different blues genres: Memphis versus Chicago, Delta blues, Appalachian music, New Orleans, and it’s all related — even back to Celtic music. We’ve always wanted to explore blues around the world and see how all that fitted in.”

Shirley went on to say: “The first thing we did was have a session with these two Greek guys, Thanasis Vasilopoulos on clarino and Manolis Karadinis on bouzouki,” Shirley says. “Neither of them spoke English, and it was an interesting way of getting the music going. We actually recorded one track sitting outside on the patio outside the studio. At night it’s so quiet there, the recording was beautiful. These were different elements that we introduced into Joe’s sound.”

Read the entire article from MixOnline.com by CLICKING HERE.

“The Ballad Of John Henry” is tentatively scheduled for release on February 24, 2009, via J&R Adventures worldwide.

Bonamassa’s last studio album, “Sloe Gin”, spent over 10 consecutive weeks at #1 on Billboard’s Blues Album Charts. He followed that album with “Live From Nowhere in Particular”, a double CD that rarely leaves my car.

Last fall, I took a road trip from Phoenix, AZ, to Flagstaff, AZ, to see Bonamassa LIVE at the Orpheum Theater. If you EVER get the chance to see Joe in concert, you have to go. He is an amazing talent and I can’t imagine any guitar player not enjoying his performance.