David Schiller has written a book that should be in the library of every guitar player. 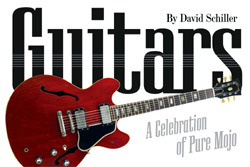 After turning the first few pages you soon realize that “Guitars, A Celebration of Pure Mojo” is a virtual guitar encyclopedia that has been compressed into a 4″x6″ treasure chest.

There are over 500 guitar photographs included in amazing detail. The book includes guitars that made history, changed the course of music and inspired new generations of players.

CLICK ON THE IMAGE OF THE BOOK TO ORDER YOUR COPY!

The world is full of guitar instruction books.

So why do we need more study books? We don’t. What we need are new perspectives and creative ideas to learn from. Guy’s Publishing Group has delivered on both counts.

Last summer, I posted a review of a breakthrough guitar chord reference book titled: “Guys Grids”. If you missed that post, check it out: Guy’s Grids: A Master Class in Guitar Chords. 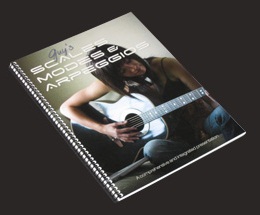 The much anticipated follow up to Guys Grids is now available!

Guy’s Scales, Modes, and Arpeggios is a comprehensive and integrated presentation of all of the most commonly used guitar scales, modes, and arpeggios in all regions of the fretboard.

Every guitarist knows that playing a solo is a skill that requires a strong working knowledge of scales and arpeggios. This book delivers that information in a very user-friendly format that guitarists of all levels will be able to follow with ease.

Make no mistake, I am very impressed with this book. The print quality is superb.  The paper quality is thick and sturdy and yet the book is thin enough to fit inside your gig bag. One thing I really love is that Guy addressed a pet-peeve of mine with most other guitar instruction books by using a spiral binding so the book would lay flat while you are using it. Thank’s Guy!

The book is available directly from the company website for $14.95 and through select retailers. I’d suggest you order one before he realizes he under-priced this encyclopedic reference tool!

There is a new guitar magazine on the newsstand called Guitar Aficionado.

It is VERY different from all of the other guitar magazines. There is no tab or song translations.

There is no CD or DVD in a plastic bag.

This magazine is more like a “Robb Report” for guitar lovers. It’s all about the high life. The articles are about guitar collections worth millions and lifestyles that are typically only enjoyed by rock stars, CEO’s and celebrities.

Hey… there is nothing wrong with dreaming!

The publisher claims that every issue will include an inside look at the exotic instruments and wondrous collections of people who are passionate about guitars and life’s finer things — including expensive watches, delectable spirits, exotic cars and high fashion.

It also included articles on fine aged bourbons, The Harley V-Rod Muscle, The 2009 Lamborghini Gallardo and touring England like 007 .

Like I said… This is NOT your typical guitar mag! 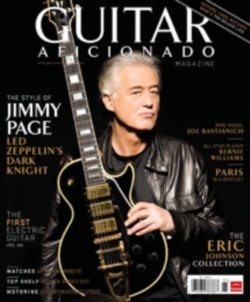 So lest you think this is a bashing post on the new publication, let me say that I went to my local Barnes & Noble and bought one.  And I love it!

I found myself glued to the magazine for weeks — reading EVERY article. And I can’t wait for the next issue.

Here is a sneak peak at the cover of the 2nd issue… with articles about Jimmy Page, The first electric guitar, Eric Johnson and more…

Guitar Aficionado is not a clone of any other guitar magazine — it is a breath of fresh air. The cover price is $7.99 USD (remember… no cd included) and I recommend you skip the morning Starbucks and go get one.  Better yet, order a 1-year subscription (4 issues) for $24.95 or… put it on your Christmas wish list like I did!

I have read my copy through two times… and I am sure one day there will be a third.

Editorial Review: With striking intimacy and candor, Eric Clapton tells the story of his eventful and inspiring life in this poignant and honest autobiography. More than a rock star, he is an icon, a living embodiment of the history of rock music. Well known for his reserve in a profession marked by self-promotion, flamboyance, and spin, he now chronicles, for the first time, his remarkable personal and professional journeys.

Born illegitimate in 1945 and raised by his grandparents, Eric never knew his father and, until the age of nine, believed his actual mother to be his sister. In his early teens his solace was the guitar, and his incredible talent would make him a cult hero in the clubs of Britain and inspire devoted fans to scrawl Clapton is God on the walls of London s Underground. With the formation of Cream, the world’s first supergroup, he became a worldwide superstar, but conflicting personalities tore the band apart within two years. His stints in Blind Faith, in Delaney and Bonnie and Friends, and in Derek and the Dominos were also short-lived but yielded some of the most enduring songs in history, including the classic Layla.

During the late sixties he played as a guest with Jimi Hendrix and Bob Dylan, as well as the Beatles, the Rolling Stones, and longtime friend George Harrison. It was while working with the latter that he fell for George s wife, Pattie Boyd, a seemingly unrequited love that led him to the depths of despair, self-imposed seclusion, and drug addiction. By the early seventies he had overcome his addiction and released the bestselling album 461 Ocean Boulevard, with its massive hit I Shot the Sheriff. He followed that with the platinum album Slowhand, which included Wonderful Tonight, the touching love song to Pattie, whom he finally married at the end of 1979. A short time later, however, Eric had replaced heroin with alcohol as his preferred vice, following a pattern of behavior that not only was detrimental to his music but contributed to the eventual breakup of his marriage.

In the eighties he would battle and begin his recovery from alcoholism and become a father. But just as his life was coming together, he was struck by a terrible blow: His beloved four-year-old son, Conor, died in a freak accident. At an earlier time Eric might have coped with this tragedy by fleeing into a world of addiction. But now a much stronger man, he took refuge in music, responding with the achingly beautiful Tears in Heaven.

Clapton is the powerfully written story of a survivor, a man who has achieved the pinnacle of success despite extraordinary demons. It is one of the most compelling memoirs of our time.