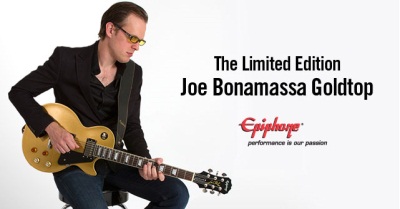 Joe Bonamassa has brought searing electric blues-rock back to its American roots, and helped to redefine the genre in the process.

The effort has won him top honors on countless “guitarist of the year” polls, and #1 status on the Billboard Blues chart—and through it all, a Les Paul has remained Bonamassa’s go-to guitar.

Previously, the only way you could acquire Bonamassa’s own breed of Les Paul was to lay your hands on the Gibson Custom Shop’s pricey Artist model… until now.

Epiphone has introduced the Joe Bonamassa Les Paul: a guitar crafted to exacting standards in the image of Bonamassa’s #1 instrument, now priced for the hard-working guitarist, but available in strictly limited numbers, with a total production run of 1,000 instruments.

The Epiphone Joe Bonamassa Les Paul nails the look of Joe’s own LP to a “T”, with its Metallic Gold finish, mismatched two-and-two control knobs, and black plastics (just like Joe’s!), and black body-back and neck finish. But the similarity is far more than skin deep. A pair of Gibson U.S.A.’s famed BurstBucker™ pickups give the guitar all the scorching sweetness of vintage PAF humbuckers, while its select tonewoods, an upgraded hardware set, and uncompromising Epiphone construction and set-up give it Bonamassa-certified sustain and playability.