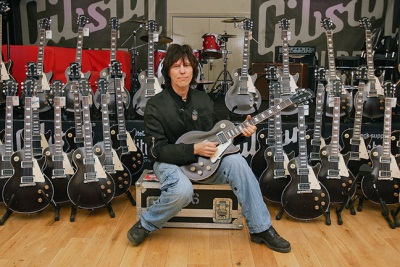 Jeff Beck in the "Gibson Showroom"

From Gibson.com… The 1954 Jeff Beck Les Paul Oxblood is the most detail-precise reissue of this hallowed instrument ever produced by Gibson Custom. All of the intensively accurate Custom Shop craftsmanship is there. From the one-piece light mahogany back to the accurately-arched carved maple top to the light aluminum wrapover bridge to the one-piece Beck-profile mahogany neck with long-tenon neck joint. Beyond even these, however, the instrument exudes the vibe of the original, with a feel, sound and finish match that pay homage to Beck’s own modified Les Paul. -GIBSON

The first 50 of these historic guitars will be carefully aged by the master luthiers at Gibson Custom to look exactly like Beck’s original, then personally hand-signed, numbered and played by Beck himself.

The next 100 guitars will be prepared with Gibson Custom’s pioneering V.O.S. finish, bringing the total run to just 150 rare instruments. Each one also comes with a specially produced Gibson Custom case with Beck’s signature silkscreened on the top, a custom care kit and a certificate of authenticity.