Recently I posted this picture of Joe Bonamassa with a “portion” of his guitar collection as a part of my review of his Phoenix concert. 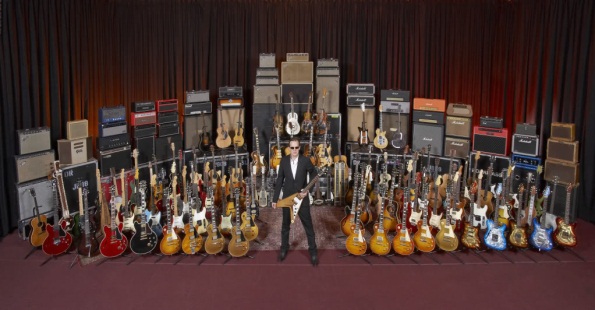 Joe Bonamassa and his Guitars

I LOVE THAT PICTURE!

I use it as the desktop background on my computer as well as a constant reminder of how “few” guitars I actually own!

The truth be known, I own 9 guitars. They are:

OK…now let’s look closer at this list. The first 2 are really my daughters. They are in her room and she’s the one who plays them (the most). So that really means I have 7 guitars. And since the Traveler guitar is only played a few weeks a year (when I travel) I really can’t count that one either. So I guess I have 6 guitars. The Rogue Resonator was an impulse purchase when MusiciansFriend.com blew them out for $99 bucks on one of their “Stupid Deals of the Day” and it’s really more of a decoration on a stand in our living room (with it’s shiny cones) so to be honest…I really have 5 guitars.

But wait… I almost forgot… I re-tuned the Schecter to “Open E” a few months ago when I thought I wanted to play slide… an idea never really took off so the Schecter is hardly being played at all right now and the Gibson is a Custom Shop that I’d hate to see get damaged so when it comes down to it… I ONLY HAVE THREE GUITARS (that I actually play).

I keep telling myself (and my wife) that I still need all of them because they all sound different. Some of my other favorite excuses are:

My wife says it’s a sickness and she is right.

It’s called GAS. Not the kind of GAS sickness you get after 2 tacos and a bean enchilada…but G.A.S. as an acronym that stands for Guitar Acquisition Syndrome.

Please understand that the acronym G.A.S. is not my creation. “G.A.S.” was coined by Walter Becker in his 1996 Guitar Player article when he wrote that “G.A.S.” was “Guitar Acquisition Syndrome” [CLICK HERE TO READ THE ORIGINAL ARTICLE].

Guitar Acquisition Syndrome (also known as Gear Acquisition Syndrome, both abbreviated to G.A.S.) is used to describe an uncontrollable urge to acquire and accumulate multiple guitars. G.A.S. should not be confused with collecting and G.A.S. is similar in many ways to very mild obsessive compulsive disorder, hence the sickness my wife believes I have.

Even when financial means are not available, the G.A.S. sufferer will do anything to procure the instrument. Be careful around these folks. G.A.S. has been known to highly contagious and spreads quickly. -Squidoo.com

I must be fair to my readers (and myself) and add that I do not keep every guitar I buy. I have sold dozens of guitars over the past few years that were bought as a result of G.A.S. (and I miss them all).

In the midst of this craziness, I find myself on eBay every day looking for the guitar that I can’t live without.  I know it’s out there and I will find it!