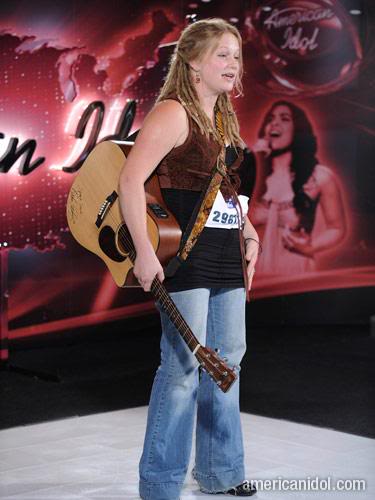 I already know what many of you are saying…”Who is Crystal Bowersox?”

Crystal Bowersox is one of American Idol’s Season #9 frontrunner girls. She is certainly my favorite.

One reviewer wrote : The 23-year-old former farmgirl and single mom has a headful of dreads, a chinful of facial piercings, and a mouthful of sandpaper-and-velvet.

She’s been strumming and singing since the age of 10 and cites trailblazing blues women like Janis Joplin, Aretha Franklin, Bonnie Raitt, and Sista Otis as her own musical influrnces. Her most notable “idol” might be Melissa Etheridge–as evidenced by the “Melissa” autograph on the body of her acoustic guitar.

She looks destined to make the “Top 12” — especially after her soulful performance last night of “Give Me One Reason”.
(video below)

I noticed that her electric guitar has not been signed. Looks like a great place for a “GuitarDaddy” autograph! Hey Crystal, is that space for sale?