Tom Noll has selected the WINNING NAME in the “Name the Roy Buchanan Painting Contest”.

This afternoon, I received the following email from Tom… 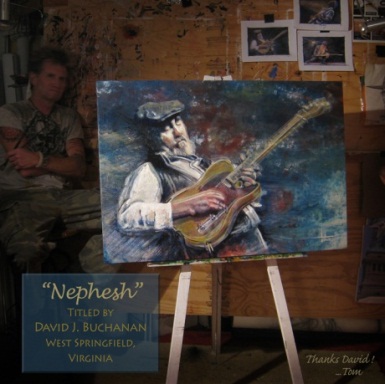 The Roy Buchanan painting… what an experience! Thanks to all of you for the great inspiration you provided along the way which helped the painting foster its ethereal feel.

I’ve got to admit that a few months back, Roy Buchanan was just a name which I associated with a man who was often referenced as a giant influence to many other guitar slingers that I loved, but I’d never explored to find out about him as to why he was so revered. Now, after this brief exposure, I hear why, and I have deep respect for who he was, what he stood for, and what he’s meant to music and to those who have followed.

This contest opened my eyes with the outpouring of emotion and creativity from fans as they expressed what my painting of Roy meant to them. Along the way came a suggestion that is a title of a 1973 song of Roy’s… “Nephesh“, (neh’-fesh) which in Hebrew means soul, or life. This title had a nice connection for me, and it was a singular submission by a person who went on to offer the comment… “and it’s always been one of mine, and my sister Jenny’s favorite songs of dad’s”.

I’m humbled to have my painting of Roy Buchanan named by his son, David J. Buchanan.

As the days of the contest rolled by, David gave us additional little glimpses of his father that enhanced what I was doing, what I was feeling, and shedding some light on what otherwise would have never been known.

Congrats and Thanks David!!! Your complimentary print will be on its way, and I’m sure you will give it a place of honor.

I’ve currently got the painting in the works, making reproductions this week, and will be shipping prints this Monday, February 6th to those who have pre-ordered them. For all others that would like to celebrate Roy Buchanan’s memory with “Nephesh” and would like to own early editions, please email me at Tom@TomNoll.com and I’ll hook you up via a paypal invoice (you don’t need a paypal account). Now that we’ve appropriately named the painting, I am honoring the introductory offer of $222 for prints for another week until February 12th.

GuitarDaddy adds… As Tom mentioned, along the way David shared many stories with us about his life as a young boy and growing up with a father that so many guitarists and musicians idolized. David shared with me that his Dad gave him a 1969 Telecaster (David was born in 1969)… but David never wanted to be compared to his father, so he just slid the guitar under his bed.

As the years passed, David grew to find his passion in poetry.

Today, his work is published on his web site: www.PoetryBuchanan.com. David also maintains a website on MySpace where he also writes a blog. Check it out at: www.MySpace.com/buchanan69.

A few days ago, David shared some personal things with me and graciously granted me permission to reprint them here on the TheGuitarBuzz.

Presented here is a rare glimpse of a private family photo and a poem that David wrote in 2005 about his father… and his guitar.

I found David’s work to be heartfelt, emotional and very thought provoking.

All through childhood I heard his guitar
Little did I know he was a star
But man was he so bizarre
Very distant, very far
With manic-depression he was on par
His only release was his guitar
There must have been an unseen scar
Hidden behind that smoky cigar
One night with lawmen he did spar
One final act in a police car
Sweet Dreams to you now you’re truly a star
Strumming Nancy in some heavenly bar
Yet I can still hear him playing
His guitar

Thank you so much David, for sharing your poetry with us!