It’s time for another “Name the Painting Contest”! 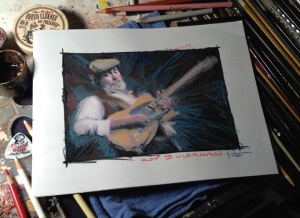 Artist Tom Noll has been busy pouring his talent into a stunning masterpiece of the legendary Roy Buchanan!

Roy was a pioneer of the Telecaster sound. He was a brilliant sideman and solo artist, with two gold albums early in his career and two later solo albums that made it on to the Billboard chart.

He is credited for influencing many guitarists, including Gary Moore, Danny Gatton and Jeff Beck. Beck even dedicated his version of “Cause We’ve Ended as Lovers” from Blow by Blow to Roy. His work is said to “stretch the limits of the electric guitar” and he is praised for “his subtlety of tone and the breadth of his knowledge, from the blackest of blues to moaning R&B and clean, concise, bone-deep rock ‘n’ roll.”

Roy was ranked #57 on the Rolling Stone list “100 Greatest Guitarists of all Time,” Guitar Player praised him as having one of the “50 Greatest Tones of all Time.”

I think you will agree that Tom has captured Roy’s “vision”, he just needs a “name”! 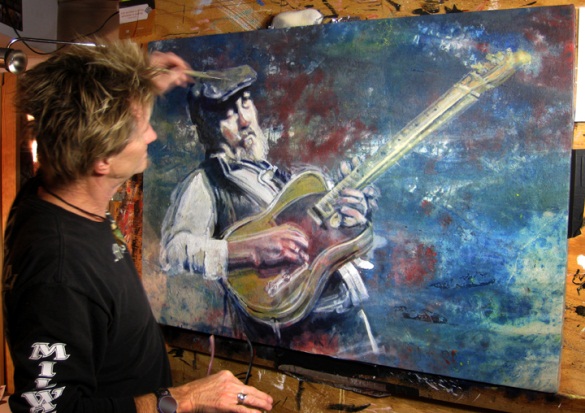 Now, on to the contest…

SO HOW DOES THE CONTEST WORK?
ALL YOU HAVE TO DO TO ENTER THIS CONTEST IS LEAVE A COMMENT TO THIS POST WITH YOUR SUGGESTION FOR A NAME OF THE ROY BUCHANAN PAINTING!
TOM WILL SELECT THE OFFICIAL NAME OF THE PAINTING FROM THE COMMENT ENTRIES AND THE WINNER WILL RECEIVE A FREE PRINT OF THE ORIGINAL OIL PAINTING!

GUITARDADDY TIP: As you can see, this painting is already in the works and according to Tom, is about one week from completion. So this contest will be short! The winner will be announced on FEBRUARY 1, 2012 and will receive a FREE PRINT from the original oil painting!

Tom is also offering a discount for pre-orders with an introductory price of $222 plus shipping for “pre-order low-number reservations” and only $199 for orders that are “pre-paid”.

Tom’s Promise: If you are the winner of the contest and you also pre-ordered a print, your money will be refunded! So go ahead and CONTACT TOM at Tom@TomNoll.com to pre-order now!

Note: In the case of duplicate submissions, the person who suggested the name first will have claim to that name. Also note, the winner will forfeit any and all rights to the name to Tom Noll if it is selected to be the winner.

PRINTS CAN BE ORDERED BY CONTACTING TOM AT THE WEB SITE LINK BELOW: