After the overwhelming response to the previous “Name the Painting” contests for Gary Moore, Joe Bonamassa, Buddy Guy, Roy Buchanan and Billy Gibbons, Ronnie Earl, my good friend and world-renowned artist Tom Noll is back at it again with the legendary Tom Waits on his canvas! 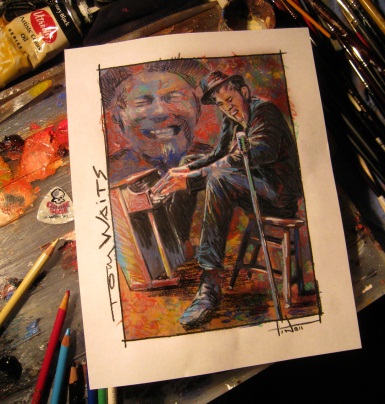 Tom Waits is a singer-songwriter and composer with a very distinctive voice, once described as sounding “like it was soaked in a vat of bourbon, left hanging in the smokehouse for a few months, and then taken outside and run over with a car.”

With this trademark growl, his incorporation of pre-rock music styles such as blues and jazz, and experimental tendencies verging on industrial music, Waits has built up a distinctive musical persona.

He has worked as a composer for movies and musical plays and has acted in supporting roles in films including Paradise Alley and Bram Stoker’s Dracula.

He has a cult following and has influenced subsequent songwriters despite having little radio or music video support. His songs are best-known through cover versions by more commercial artists: “Jersey Girl”, performed by Bruce Springsteen, “Ol’ ’55”, performed by the Eagles, and “Downtown Train”, performed by Rod Stewart. Although Waits’ albums have met with mixed commercial success in the USA, they have occasionally achieved gold album sales status in other countries. He was nominated for an Academy Award for his soundtrack work on One from the Heart.

In 2011, Waits was inducted into the Rock and Roll Hall of Fame.

Tom estimates the Tom Waits painting will take several weeks to come together (progress shots will be posted on his web site – CLICK HERE), with prints of the original oil painting available shortly after.

The artprints are super high quality giclees, which utilize fade resistant UV archival inks. They’re produced from the original oil painting, and are rolled and shipped in a rigid tube along with a certificate of authenticity. The prints are perfect for matting and framing, and will be a memorable addition to any room.

As a BONUS, Tom will include a FREE inkjet of the sketch along with the full print!

GuitarDaddy Tip: You can Pre-Order a Tom Waits print by contacting Tom directly. Pre-ordering will allow you to reserve a low-numbered print and to receive your print much faster.

SO HOW DOES THE CONTEST WORK?
ALL YOU HAVE TO DO TO ENTER THIS CONTEST IS LEAVE A COMMENT TO THIS POST WITH YOUR SUGGESTION FOR A NAME OF THE TOM WAITS PAINTING!
TOM WILL SELECT THE OFFICIAL NAME OF THE PAINTING FROM THE COMMENT ENTRIES AND THE WINNER WILL RECEIVE A FREE PRINT OF THE ORIGINAL OIL PAINTING!

Tom’s Promise: If you are the winner of the contest and you also pre-ordered a print, your money will be refunded! So go ahead and CONTACT TOM at Tom@TomNoll.com to pre-order now!

“I love these NAME THE PAINTING contests! They are so inspirational to me!”
– Tom Noll, owner of Creative Bone Artworks

Also, keep checking back to TheGuitarBuzz.com for contest updates!

Note: In the case of duplicate submissions, the person who suggested the name first will have claim to that name. Also note, the winner will forfeit any and all rights to the name to Tom Noll if it is selected to be the winner.