Recently, I had the opportunity to interview the man behind the brush, world-renowned artist and owner of Creative Bone Artworks, Tom Noll.

We had a great time talking guitars, painting, Harley’s, Les Paul and life.

Here is the transcript:

What is life like for you on an average day?
Well, waking up is a good start. I never take a day for granted and I fill it with creativity. I’m always envisioning what I can transfer from brain to canvas, and how I can best capture my subject. A long ride on the Harley is always a good brainwave session.

How long have you been painting “professionally”?
My oil painting has only been the last 4 1/2 years. I’ve worked in the design and advertising world for 32 yrs., and after a serious health scare decided to start my Creative Bone Artworks and create a vibrant body of work to leave behind. 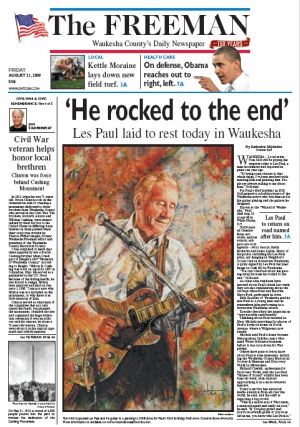 What made you choose Rock-n-Rollers and Guitar Players as your painting subjects? I mean…have you ever painted a picture of a barn in a wheat field?
Starting out with fluid watercolors in the late 70’s, I painted the barns and landscapes and did the art fair circuit on the weekends. Recently, I painted the large 8’ x 9’ Bob Marley on request from a client and fell in love with the energy. Now, I live for the positive response to my work, and the happiness that I see it brings to others.

Is it your goal to one day meet the person that you painted? You know, the “artist” meets the “artist” kind of thing? Have you been able to meet anyone that you painted?
Yeah, its always great to meet that person after you’ve spent weeks looking into their psyche to discover what moves them, to bring them to life on the canvas. One such situation was my fortunate meeting with Les Paul, and hanging with him for an afternoon.

Were you able to show him your work? What did he think?
Oh yeah. He was very humbled and he signed several prints and the original oil painting. Its one thing to nail his image, but then you have to get his ax right. With Les Paul…talk about pressure! We used the painting as the backdrop to his book signing that day, and I gave him the framed print #1. He was thrilled! Ultimately, the image filled the front of the local newspaper on the day he was laid to rest. 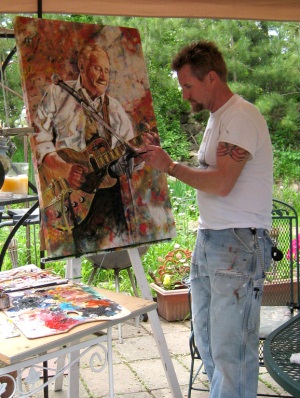 You know when you can put a guys image on his fan’s living room wall for that constant recognition, who wouldn’t be pleased with all that that brings.

I keep missing Joe (Bonamassa) at his shows, and twice friends have delivered images to him for me. Once in Milwaukee, before I had painted him, he was shown what I was planning to do with him in that cool gold lame suit, and then after it was done, he saw an image of it finished in LA and he approved and signed a photo print to me. I’d had a “Name the Painting” contest with his fans going at the time, and I was told Joe wanted to submit an entry, but, well…he’s a busy guy.

Tell me about your guitars! When did you start playing?
I started on a Fender Squire, but I was really challenged and it didn’t even feel right. Then one day I said to myself, “well ya dumb &#%&, you’re lefty handed. So I flipped it over and restrung it, ala Jimi style…and immediately I sounded exactly like him…ha, ha! 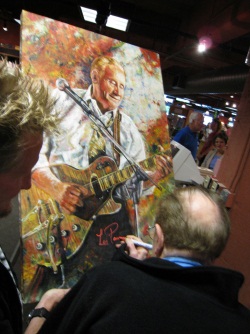 Do you have a favorite axe?
Well, the Squire is now retired on the wall, graced with a Joe Satriani signature, and I’ve purchased 4 lefty guitars. I’ve got an electric acoustic guitar, a Martin Backpacker for on the Harley, a Custom Tele, but the Les Paul is probably my fav.

Tom, you have painted an amazing list of past and present musicians. How do you go about choosing who will be on the easel next?
You know, I’m pretty approachable, and often its by request…and if the subject is someone I’m passionate about, I’m off and running. I’ve also done my fair share of custom paintings for clients that the public never sees.

Most guitar players will play guitar well into the late stages of their lives. What about painters? How long do you see this creative drive staying alive in you?
Hmmm…I’m guessing the lifestyle of a musician is a bit more “late night” than mine. If they can hang in there, I’ll be right behind them with my brush. Then, as with the late Gary Moore, now that he’s passed, its my obligation to capture his spirit forever.

Other than painting and playing guitar, does Tom Noll have any other passions?
Ha, ha…step into my garage!

Tom Noll and his "Red Ripper"