I knew this was coming. I really did.

Honestly, I thought it would come earlier than it has, perhaps even a year or more ago. But there is no reason to delay it further… now is the time… so here goes….

I receive about a dozen emails a week from GuitarBUZZ readers. Most are very complimentary and thank me for posting a story or review that they had not read anywhere else.

But in the course of an average week, I can expect one of them to read something like this:

“Hey GuitarDaddy, I really enjoy following your blog but I have to ask: “Why do you write so much about Joe Bonamassa”? I mean, the guy’s good, but he’s just a blues player!”
Sincerely,
Regular Reader.

Well, this post is my answer to that question.

Thanks for your email. I truly appreciate it. I often wonder if anyone reads this crazy passion of mine. The fact is, even if nobody read it at all, I’d still do it!

To accurately answer your question, I need to share something with you.

I need to take you back to the very first post on TheGuitarBuzz.com. I wrote it on December 31, 2008, a little over 3 years ago.

It was New Year’s Eve and after 3 months of research, planning and teaching myself how to use WordPress, I was launching TheGuitarBuzz blog with the first post. It marked the end of the 3 month “development period” that began just a few days after attending my first Joe Bonamassa concert… and here is my ticket to prove I was there:

My first Joe Bonamassa concert was the inspiration for "TheGuitarBuzz.com"

The concert was 2 hours away and it was well after 1:00am when I finally got back home. But even after a 10 hour work day, a 4 hour round-trip drive between Phoenix-Flagstaff and a 2+hour concert, I wanted to play my guitar as soon as I walked in the door.

Why did I want to play my guitar when I should have collapsed into bed? It’s simple. I left that concert inspired because that night, I found my GUITAR HERO!

The truth is, Joe Bonamassa inspires me to play and he also inspired me to create this blog.

I fell in love with the guitar all over again that night and when I finally did lay down in bed, the inspiration to create TheGuitarBuzz came to me. I did not sleep much…for several days.

So I pay tribute to that inspiration by following his career and posting (often) about his guitar playing. My “tribute posts” started with the very first blog post. I titled it: “Here’s To The Guitar Hero!“.  Allow me to re-post a few portions of the “Genesis Post” on TheGuitarBuzz.com:

Guitar Heroes have tones you can identify from the first note you hear.  From jazz to classical and from punkers to shredders, these are the guys that rock my world, your world and the world of countless other guitar lovers everywhere. When I listen to my Hero’s play, I am reminded why I play.

There is no other instrument like the guitar. In the hands of a new player, it represents the ability to be expressive, inventive and artistic.  In the hands of an accomplished player, the guitar is the centerpiece of musical creation…

Is the Guitar Hero a dying breed?  I don’t think so.  There are plenty of young guns out there like Derek Trucks, Guthrie Govan and Joe Bonamassa that inspire the next generation to keep the flames alive and burning.  They motivate us to keep practicing, keep learning and keep playing…

Oh by the way, in case you think Joe Bonamassa is the only guitar player I listen to…get this: I have over 12,000 songs on my iPod. Only 169 tracks are by Joe Bonamassa (yes, that’s his entire library of recorded songs plus a few rips from YouTube!)… but Joe is still my GUITAR HERO!

I think he’s a Guitar Hero to a lot of other players as well. 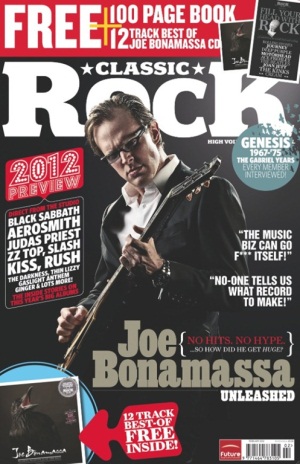 But don’t think that Joe Bonamassa is “just a blues player”. No RR, not anymore…not at all.

It has taken a while for the media to catch up but finally, this month, Joe Bonamassa was plastered on the cover of “Classic Rock Magazine”!

Any why not? Alongside his brilliant solo career, Joe is a founding member of Black Country Communion, the band who has released 2 scorching rock albums, a live DVD and was named “Breakthrough Act of the Year” at the most recent Classic Rock Roll of Honour Awards.

Listen RR, I will admit that Joe gets a lot of press on TheGuitarBuzz. Consider me guilty as charged. But a quick glance at my Tag Cloud will reveal the dozens of players and bands who have been referenced in the over 400+ blog posts that have followed that New Year’s Eve 2008 launch.

So where to from here? Well, rather than post yet another Joe Bonamassa post later this week, I will merge it into this one. That way the overall count won’t be as skewed! My plan was to post this video later in the week, but after further thought I believe it fits perfectly right here as the video begins with Joe and his personal reflection on how his career got to where it is today.

The video is a first-class production from Jim Dunlop, introducing Joe’s “Signature Pedals” — the Cry Baby and the Fuzz Face.

“Dunlop is very proud to present two signature pedals that were developed in collaboration with Joe Bonamassa, an artist who is famed for not only being one of the most talented guitarists working today but who also owns one of the most discerning ears when it comes to guitar tone and gear. Joe talks to us about the passion and dedication he has for his craft, the story behind the creation of his signature pedals working alongside Dunlop’s product designer Jeorge Tripps, and gives an intimate solo performance where he features his use of these electronics.”

The truth is, RR, there’s a lot to write about Joe…and I doubt I will stop anytime soon.

Would you stop writing about your hero? Of course not. And neither will I.