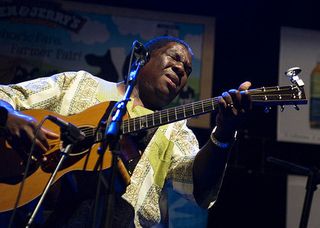 Vusi Mahlasela is a South African singer-songwriter. His music is generally described as “African folk”.

His work is an inspiration to many with themes that include the struggle for freedom, and forgiveness and reconciliation with enemies.

Vusi can be heard performing on Warren Haynes’ Live at Bonnaroo release during the song “Soulshine” and with the Dave Matthews Band on “Everyday”, from the album of the same name.

Vusi was also one of the performers at the Live 8 concerts.

It has been said that Vusi Mahlasela sings as a bird does: in total response to being alive. Apart from his remarkable songwriting talent, Mahlasela is in fact blessed with one of the most remarkable voices in contemporary popular music.

In June 2007, Mahlasela performed “Thula Mama” at the TED Conference. The video of that performance is presented HERE.