Life Without You: Thirty years ago, Stevie Ray Vaughan took the world by storm with Texas Flood. As Sony releases the ultimate anniversary edition of that album, we celebrate the phenomenal rise of the last great blues guitar hero of the 20th century. 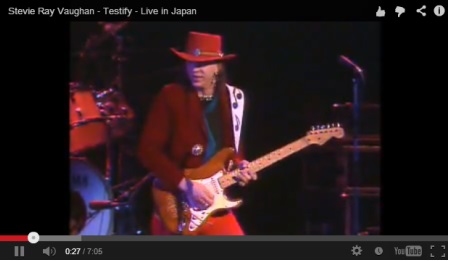 In May 1983, only days before Stevie Ray Vaughan was scheduled to play his first concert with David Bowie on the Serious Moonlight tour, his career had reached a fork in the road.

Texas Flood, his debut album with his band Double Trouble, was in the can and set for release the following month, but the tour with Bowie, which was scheduled to last until the end of the year, threatened to postpone his ability to effectively promote the album until 1984. Facing a choice between increasing his exposure as a supporting member of Bowie’s band or supporting his solo career on his own while the album was still fresh, Vaughan chose the latter.

The choice was not as difficult as it might have seemed initially. According to Chesley Millikin, who was Vaughan’s manager at the time, Bowie’s management reneged on an agreement to allow Double Trouble to open select dates on the tour, and even prohibited Vaughan from doing interviews without prior permission, which made it difficult for Vaughan to even talk about Texas Flood.

Read the rest of this article on the GUITAR WORLD web site by [CLICKING HERE].