In honor of Bob’s big day, I am re-publishing one of my favorite Dylan stories from a couple of years ago…

Take A Good Look At This Face…

If you were walking down the street and came face to face with Eric Clapton… would you know it was him?  Ok.. what about Bob Dylan? If you said “yes”, you have a sharper awareness of historical rock icons than many police officers! 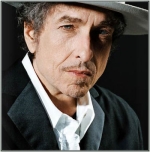 As the story goes… Bob was taking a walk in Long Branch, New Jersey — minding his own business.  It was raining and he had a jacket with a hood on.  He came upon a house that was “For Sale” and decided to take a look in the window.

It turns out that a neighbor was watching through the window and called the police to report the suspicious looking man.  The officers, both 24 years old, did not recognize the then 68 year-old Dylan.  Even after he told them his name was Bob Dylan, they still asked him to show some identification.  Poor Bob did not have anything with him.

Luckily, he was traveling on tour and the tour bus was not far away.  So the police accompanied him to the bus and Bob was able to prove who he was — avoiding an unpleasant overnight in the slammer.

I suppose at that moment Bob was humming one of his favorite songs titled: “Like a Rolling Stone”.  Remember the lyrics?

…How does it feel?  To be on your own?  To be without a home?  Like a complete unknown? Like a Rolling Stone…