Ronnie Earl and the Broadcasters and Stony Plain Records recently released “The Hope Radio Sessions” on DVD. The sessions were recorded at 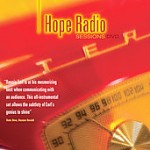 Wellspring Sound in Acton, MA on April 21 and 22, 2007. Ronnie Earl is one of the worlds most acclaimed blues guitar players.  For over 35 years he has thrilled audiences who love his soothing “Blues with Soul” style.

I find it amazing that in all of that time Ronnie has never been captured live on video or DVD (with the exception of an instructional based video) until now. The Hope Radio Sessions live concert DVD features many of the instrumental blues songs that are included on the Hope Radio album.  The DVD also includes alternative versions of some of the songs as well as two rare solo acoustic guitar selections and (one of my favorite features) a private, personal interview with Ronnie Earl himself.

I had the opportunity to see Ronnie Earl live this past summer in Arlington, MA.  I was fortunate to meet him personally, and was invited backstage before the concert.  Ronnie introduced me to the members of the Broadcasters band and autographed a special blue leather guitar strap to me — which proudly hangs on my office/studio wall today.  A very gracious man with a tremendously kind spirit, Ronnie Earl has limited his travel and touring in recent years due to health reasons.  This is unfortunate for those of you who have never had the opportunity to see his mesmerizing talent in person.

If you are ever traveling to the Boston area, be sure to check Ronnie’s Web Site to see if he is performing live in the area.  If not, pick up the DVD with this LINK and witness for yourself one of the true masters of stratocaster blues.  You will be glad you did!