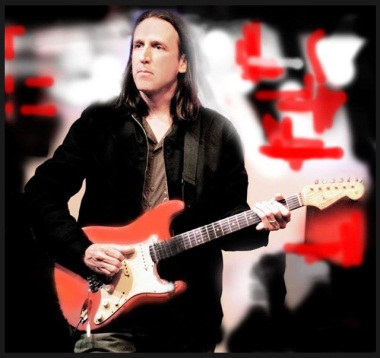 I was talking guitars with a buddy last week and I brought up the name of Michael Landau. He said “Michael who?” What followed was a long discussion about one of the greatest guitar players he had never heard of.

Musician and composer Michael Landau was born and raised in Los Angeles. He grew up with the music of The Beatles, Jimi Hendrix, Led Zeppelin, Cream and The Band.

In his early teens, Michael quickly became very interested in jazz and electric jazz music. Weather Report, Pat Martino and Jaco Pastorius were some of his early obsessions. From this diverse blend of influence, his sound and path began to take shape. His current group focuses on the improvisation and spontaneity of live shows. “I live for those live moments when the sound and emotion becomes this monstrous force bigger than the individual musicians, it becomes a unique creation and feel, exciting and calming at the same time, difficult to describe but I’m addicted to it.”

Michael starting playing guitar at age 11, at age 16 he began playing the L.A. club scene with an R&B band and shortly after he toured the west coast with Robben Ford which
included band members Jimmy Haslip and Russell Ferrante. At age 19 he joined Boz Scaggs for a world tour and by the age of 20 he started to do session work on the recommendation of long time friend Steve Lukather.

Some session highlights over the coming years would include Pink Floyd, Miles Davis, Joni Mitchell, BB King, James Taylor, Ray Charles and Rod Stewart. There is a complete session discography at allmusic.com with over 700 records and soundtracks listed!

His most recent album, “The Michael Landau Group Live” was released in October ’06 on Tone Center Records. Here’s a quote from a review by John Kelman:

“The Real Question, when a studio ace comes out of hiding and releases two hours of visceral material, is this: who is Michael Landau when he’s in total control of the situation? While his stylistic breadth elsewhere would suggest that this is only one part of the answer, “Live” posits him, amongst other things, as a powerful torchbearer for Jimi Hendrix, While the late Stevie Ray Vaughan was most often saddled with that accolade, Landau’s broader language more accurately represents where Hendrix might be today, since the late guitar icon was clearly moving towards his own view of jazz in the final days before his tragic passing in 1970.”

Michael currently tours and performs with his own group and a new band with Robben Ford, Jimmy Haslip and Gary Novak called “Renegade Creation”.

Maybe you haven’t heard of Michael Landau by name…
…but you certainly have heard him play.