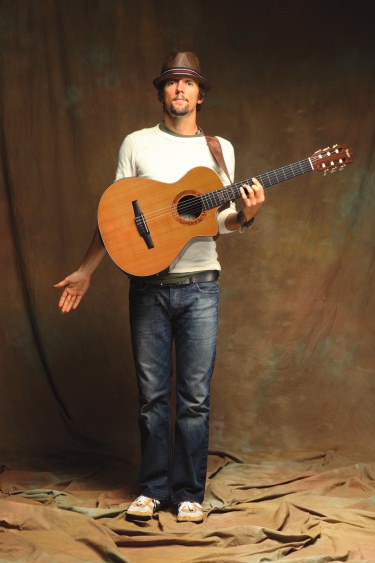 Jason Mraz has spent the past thirteen years performing everywhere from southern California coffee shops to stadiums with his Taylor guitars.

Along the way, Mraz has released three studio albums, several EP’s and live albums including the recently released Beautiful Mess – Live on Earth DVD/CD. Mraz’s live shows have garnered critical acclaim around the world and his albums have earned multiple Grammy® nominations. Late last year, his hit single, “I’m Yours”, set a music industry record for the most weeks on the Billboard Hot 100 charts. In early December, Mraz visited the Taylor factory to meet with the company’s design team and to complete work on his own Taylor model, the Jason Mraz Signature Model (JMSM).

The JMSM is based on Mraz’s go-to guitar, a Taylor nylon-string NS72ce, a guitar he says “nurtured a whole album’s worth of songs” and in performances, “gave me a way to communicate with the audience without a guitar standing in my way. It felt like it was part of me, it was a part of the energy that I wanted to put out there.” Crafted from a back and sides of Indian rosewood and a top of Western Red cedar, the JMSM includes key design touches provided by Mraz. The fretboard inlay, in Mexican cypress, features the phrase “Be Love” set below a design that features a triangle within a circle, which mirrors a forearm tattoo he got in July 2009. “I choose this symbol simply because I want to be whole in mind, body and soul,” he explains. “I think that’s a divine trinity there. What is ‘Be Love’ but cutting out the middle man.