August 13, 2009 we lost the man who created The Electric Guitar!

I have posted links to “The Chop Shop” in the past and it seemed appropriate today to provide a link to “The Chop Shop Hall of Fame” page that honors Les Paul, and includes a high-resolution (free) download image of the man himself. 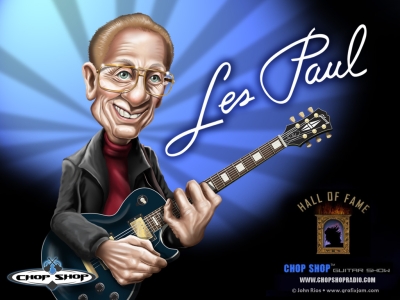 Les Paul was born Lester William Polfuss. Les started playing music on harmonica at the age of 8. By the time he was 13 he was playing guitar in a country band. At age 17 Les dropped out of school to join a radio band at KMOX in St. Louis.

In the mid-30s Les decided he need to make his acoustic guitar louder, and extracted the magnetic receiver from a telephone, used it as a pick up in a 4” X 4” log, inserted into his instrument, and helped create the solid body electric guitar.

In 1947 Les invented a system of sound on sound recording using 8 different guitar parts to create “Lover (When You’re Near Me).” He did the recording with shellac disks. Les would record a track onto a disk, then record himself playing another part, in addition to the 1st recording layer by layer until he was satisfied. This is the 1st known example of multi track recording.

In the early 1950s, Les made a number of revolutionary recordings with his wife, Mary Ford, who sang. These records were unique at the time for their heavy use of overdubbing. Their hits included “How High the Moon,” “Bye Bye Blues,” and “The World Is Waiting for the Sunrise.”

In the 50s Gibson incorporated this design and created the Gibson Les Paul, one of the best selling guitars of all-time.

In 1954, Les continued to develop this technology by commissioning Ampex to build the first eight track tape recorder, at his expense. From this point, he was known as the father of the modern-day recording studio.

In 1978, Les was inducted into the Grammy Hall of Fame.

In 1983, he received a Grammy Lifetime Achievement award.

In 1988, Les was inducted into the Rock and Roll Hall of Fame.

In 1991, The Mix Foundation established an annual award in his name; the Les Paul Award, which honors “individuals or institutions that have set the highest standards of excellence in the creative application of audio technology.”

In 2005, Les was inducted into the National Inventors Hall of Fame.

In 2006, Les was inducted into the National Broadcasters Hall of Fame. He is also an honorary member of the Audio Engineering Society.

Rest in peace Les Paul, we will NEVER forget you.