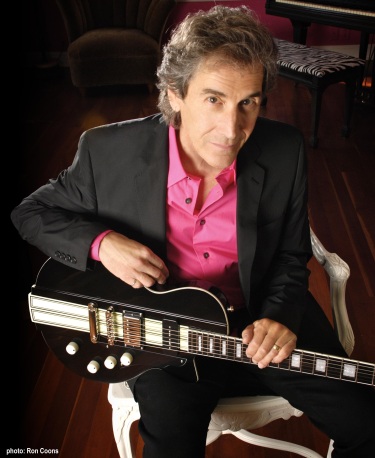 The title gives this one away. I could end right here. But instead, I will tell you the story…

I met Rick Vito at NAMM earlier this year. He was stumping his new signature axe from Reverend Guitars, a brand that I wanted to learn more about – and they were on my hit list that Saturday afternoon. So was Rick.

I watched him noodle on his black signature, playing everything from slow blues to Bob Seger to Fleetwood Mac. No doubt, the man has chops that won’t quit.

But it was the guitar that I kept staring at.

Art Deco? Race Cars? Tuxedo looking? Whatever it was, I was hooked on the look. And to be honest, the sound.

Last week, my Rick Vito Signature guitar arrived – thanks to an awesome deal on eBay. This art deco masterpiece sounds as good as it looks! The korina construction is warm and resonant, the ebony fretboard adds clarity and a slick feel. The neck P90 has been moved slightly closer to the bridge for extra bite.

But the big news is the Reverend Dual-Pro bridge pickup. Based on a mid 1960’s Supro™ pickup, it’s a hot single coil with a second blade polepiece in addition to the standard screw polepieces. The blade is essential to the unique sound: imagine a P90 meets Tele with humbucker output… fat, raw and clear. And they managed to fit it all into a standard size humbucker cover, a first in the industry so they say.

Vito is a slide virtuoso and there are dozens of videos on YouTube like this that prove it: