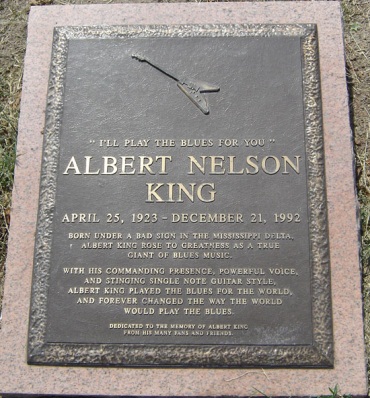 Albert was known as one of the “Three Kings of the Blues Guitar”, along with B. B. King and Freddie King. He was a large man, 6′ 4″, 250 lbs, with incredibly large hands that were perfect for playing the guitar.

King was a left-handed “upside-down/backwards” guitarist meaning that while he was left-handed, he usually played right-handed guitars flipped over upside-down so the low E string was on the bottom. The electric guitar (specifically the Gibson Flying V, which he named “Lucy”) was his signature instrument. In later years he played a custom-made Flying V that was basically left-handed, but had the strings reversed. He also used very unorthodox tunings, often tuning as low as C — to allow him to make massive string bends.

This video is from a LIVE recording in the mid-1980’s titled “Blues Legends: Albert King, Live in Sweden” and the DVD can still found on eBay…usually under $10 bucks. If you love the blues, you should buy one of these while you can. What I LOVE about this clip is the interview and the open and candid answers that Albert gave. For a big man, he had an even bigger heart. He loved his fans and he loved the blues. His music lives on in me — which is the purest way to measure one’s impact on people’s lives.

I miss you Albert – Happy Birthday!

One more thing… You can download a BACKING TRACK to Albert King’s “Born Under A Bad Sign” by CLICKING HERE.