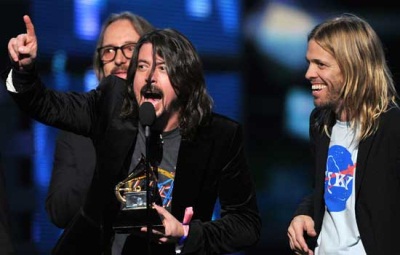 But the most impressive memory of the night may have been Dave Grohl’s acceptance speech for Best Rock Performance.

“Dave Grohl Grammy Speech” is the second subject that comes up when you type his name into Google.

Rightfully so (in my opinion).

I heard this LIVE last Sunday night…and when I did, I thought to myself: “wow…never a more profound statement about music”.

“This is a great honor, because this record was a special record for our band. Rather than go to the best studio in the world down the street in Hollywood and rather than use all of the fanciest computers that money can buy, we made this one in my garage with some microphones and a tape machine…

The Grammy’s have taken down most of the video postings due to copyright violation – but I did find one version on YouTube. Check it out while it lasts:

So what do you think? The internet has been a BUZZ for 3 days about this. Without being overly philosophical or broaching the “record-label-bashing” position, my take was really very simple.

As guitarists, it works it’s way down to our hands.

So learn your craft. Practice your guitar. Spend money on lessons, not gear. Then go out into your garage and play! I believe that is what Dave Grohl was saying.

At least that’s what I heard. -GuitarDaddy.