Blues-Rock Star Joe Bonamassa Sells Out London’s Royal Albert Hall For May 4th Show and Eric Clapton joined him on stage to perform “Further On Up The Road”!

Los Angeles, CA, May 4, 2009: Guitar virtuoso, vocalist and songwriter Joe Bonamassa played to a sold out crowd at London’s prestigious Royal Albert Hall on May 4, 2009. A milestone in Bonamassa’s career, self described as “twenty years of professional sweat and toil all culminating into one moment,” it puts him in the company of such legends as The Beatles, Led Zeppelin and The Who, all artists who have played the historic venue. Adding to the excitement, Eric Clapton joined Bonamassa on stage for a joint-performance of Clapton’s hit “Further On Up The Road.” 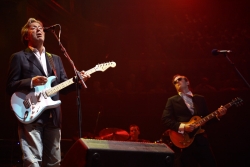 The show was part of Bonamassa’s US, UK and European tour for latest album, The Ballad of John Henry, which was released Feb. 24 and debuted at #1 on Billboard’s Blues Albums chart.

Getting rave reviews, Nicky Horne from the UK’s Planet Rock Radio called the album “a quantum leap from his previous albums, and they were damn good – if he keeps this up, he is destined to walk alongside the truly greats.” Joe also just appeared on the UK’s Jools Holland Show on Apr. 17 where Holland was quoted as saying, “Eric Clapton said to me [about Joe] ‘there is this amazing guitarist, you’ve got to hear him.’”

Joe was featured on the cover of the April 2009 Guitar Player and just won “Best Blues Guitarist in their readers’ choice polls for the third consecutive year. He also just finished up the first leg of his 2009 US Tour, a tour that has been building more fans each year and which Blues Matters recently likened to “bordering on a religious experience.”

In 2008, Joe Bonamassa was honored with the issuing of the “Inspired By Joe Bonamassa Aged Les Paul Goldtop” from Gibson Custom. Just 300 of the limited edition guitars were made, valued at $6,000 each. Gibson.com wrote, “Right now, there’s no better blues-rock artist than Joe Bonamassa.” !