This message text… copied from the eBay listing…

Joe Bonamassa is one of the best guitarists in the world and also one of the nicest, most humble guys out there and I’m proud to be his friend. If you don’t know, Joe has had seven consecutive albums debut at #1 on the Blues charts and his latest album, Dust Bowl, debuted at #37 overall in any genre! That was his highest overall debut and the fifth in a row to be higher than the last. Put simply, Joe’s popularity is increasing exponentially and this is your chance to own the guitar that started it all for him…a true piece of music and guitar history.

Joe used this 1968 Gibson Les Paul Standard as his main axe from 1998-2000 and featured it prominently on his first solo album, A New Day Yesterday. It’s an incredible guitar. Small headstock. Round, beefy neck. Sustain for days. See Joe’s letter of authenticity. 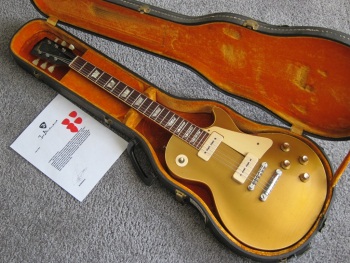 Joe is notorious for not trading or selling any of his gear…mainly because he uses it all. He told me this ’68 LP was the first significant guitar he’s ever let go…and one of the most expensive in his collection no less.

So how did I get it? Well, I had to do my fair share of begging and then give up two of my best vintage guitars…a flawless 1953 Gibson ES-295 and a 1968 Gibson ES-355. Scotty Moore and Freddy King models. It was a good trade for us both…Joe knows I am selling this to fund more inventory for my shop and is very understanding…if I could afford to keep this and keep my shop going, I would. I’m starting this at just 99 cents with NO RESERVE to give everyone an opportunity to bid! It will be a fun one for sure.

This guitar will probably have more collector appeal, but this really is one of the best Les Paul’s I’ve played…and I’ve played one of everything. The P-90s are very strong (8.75k bridge, 8.41K neck) and they sustain more like humbuckers with fat, meaty notes that cut through. This one is nice because unlike most late 60s goldtops, it isn’t a boat anchor…just over 9 lbs on my digital scale. The neck is absolutely heavenly…round C shape without the big shoulders and measures 0.936″ at the nut, 0.861 at the 1st fret, and 1.001″ at the 12th fret. As you can see, the guitar is evenly weather-checked — and interestingly this very goldtop is what gave Joe the idea to have all his Gibson Les Paul signature models aged at the factory. It has the expected buckle rash on the back but no structural issues at all. The guitar is all original save for the metal saddles, a scratched-on social security number under the serial stamp (from the first owner, not Joe…it has been blurred out in the photo), and three tiny screw holes on the butt from a trapeze tailpiece (not a Bigsby)…that obviously didn’t stay on long. It also had a really nice pro refret that you can barely notice. All the pots date to early ’68 and the wiring and soldering is all original save for a removed back shroud, 50s style.

Here is a link to the actual eBay listing.