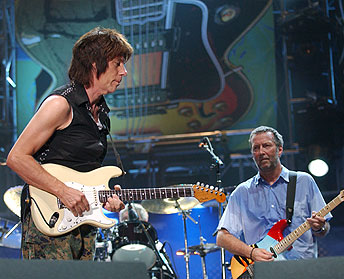 The Beck-Clapton collaboration will undoubtedly be one an amazing show.  The artists will perform in sets “Together and Apart”.

The duo have shared the stage at Festivals and benefits previously. Both artists admitted to having a fantastic time on stage together…

The following shows have been announced:

“Eric and I played together in Japan earlier this year and had a blast. Since then we have been in regular contact and talked about doing a similar show for our fans. Looking forward to the shows in 2010,” — Jeff Beck.

“I’ve always considered Jeff Beck to be one of the finest guitar players around. He’s a friend, a great guy, and a truly gifted musician. We had such a fun time in Japan that it seemed natural to play together again,” — Eric Clapton.

My guess is that other cities will follow… if not, be ready to buy the double DVD in the fall!