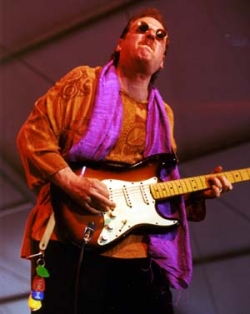 I Love Ronnie Earl, and Ronnie Earl Loves me! When I traveled to Boston last year to see Ronnie play live, he invited me backstage and gave me a guitar strap that he personally signed “Love & Blessings, Ronnie Earl”. That strap is hanging on the wall in my home studio. It is quite simply… too sacred for me to play with.

The real truth is, Ronnie Earl Loves everybody.

Ronnie is a long time virtuoso of the blues guitar. He plays (as he says) “with soul” and not only do you hear it with your ears, you see it in Ronnie’s face when he plays. Most photos you will find of Ronnie playing look a lot like the one to the left. Can’t ya just feel the blues dripping from that Strat!

Ronnie is a true anomaly in the music world. He doesn’t tour, he doesn’t show up on David Letterman, he doesn’t play at rock festivals, he doesn’t give interviews and he isn’t the slightest bit interested in being a “Star”. What Ronnie is intersted in is touching your heart (& Soul) with his music. If, after listening to Ronnie’s music, you feel a shot of love, warmth, healing and peace…Ronnie has accomplished what he set out to do.

Ronnie has just released “Living in the Light” from Stoney Plains Records. I was honored to receive a review copy.

I won’t go through a track-by-track review but I will say that in the space of one single 78-minute CD you will be treated to the most fiery Chicago style blues imaginable including a belated companion piece to the classic “Blues From The Westside” (from the “Still River” album). You will smile and shuffle your feet to Ronnie’s patented brand of lively guitar-and-Hammond fueled jazz-blues, you’ll be taken down to the Delta with acoustic blues, you’ll be uplifted by a beautiful Bob Dylan gospel cover including a choir and you will be soothed by the most serene Sunday morning blues you’ll ever hear. 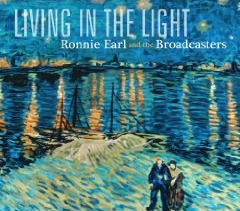 Then there is the centerpiece track, “Child Of A Survivor”, which serves both as Ronnie’s tribute to victims of the Holocaust (which included members of his own family) and a reminder that we must never forget what humans are capable of doing to each other. This heartbreaking sentiment is expressed through the unusual but incredibly effective and entirely appropriate slow brooding blues featuring a heartfelt vocal from Kim Wilson.

If you’ve not had the pleasure (actually the privilege) of hearing Ronnie Earl play live, this CD will serve as the best possible introduction to the man. If you are like me, and have followed Ronnie’s profound career for many years, then this is a CD you will surely want to own.

Reverand Keith Gordon (About.com) said: There really aren’t words sufficient to describe Ronnie Earl’s incredible six-string talents. Just when you think that you have the man figured out, he pulls out a musical triumph like Living In The Light. It’s not that the album defies expectations (Earl’s skills are such that you’re always guaranteed a great time) but that Earl manages to set the bar higher with each musical outing, and then clear it with ease.

We all love you Ronnie! Keep the Blues coming our way!