I often wonder what makes me think of certain things at certain times. I’m sure it has happened to you… when memories of a distant relative you have not spoke with for years come vividly to your mind… then two days later that same relative calls you.

Out of the blue? Totally coincidental? Perhaps, but I prefer to yield to a higher power. 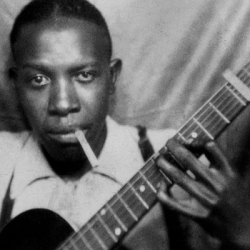 Last week I had the urge to watch Eric Clapton’s “Sessions” DVD. I had not watched it for over a year.

It’s one of those “Love it -or- Hate it” DVD’s (I happen to LOVE it) where EC devoted an entire release to the music of Robert Johnson.

Robert played his journeyman Blues throughout the South. In the mid 1930’s, he recorded 41 tracks that would change music forever.

Many say it was the birth of Rock ‘n Roll.

Songs like Preaching Blues, Rambling on My Mind, Dust My Broom, Traveling Riverside Blues, When You Got a Good Friend, Little Queen of Spades, Sweet Home Chicago and Love in Vein were recorded over a few historic days in an old building at 508 Park Avenue in Dallas, TX. (Note to Historians – there was another recording session in San Antonio…)

Robert Johnson’s influence on the Blues transcended to the great guitarists of Rock like Clapton, Paige, Hendrix, and Richards… who all profess astounding respect for Johnson’s small catalog of work.

So why am I writing about this? 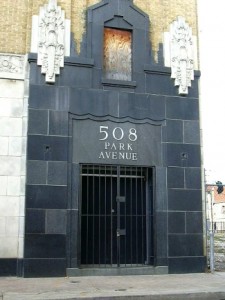 As I watched the DVD, my mind started wandering… and I wanted to find out what has become of the historically significant building located at 508 Park Ave in Dallas, TX.  Several sets on the “Sessions” DVD were recorded there as a tribute to Johnson, and I was curious about what the building was being used for today.

508 Park Avenue started life as a film storage warehouse for Warner Brothers Pictures and later became the Brunswick Records Building. Johnson recorded there in June of 1937 in a sweltering makeshift studio. Others were said to have recorded there like Charlie Parker and Bob Wills.

I think it’s safe to say that the building has significant musical roots.

The building has been vandalized multiple times. Today it is vacant and boarded-up. The current owners claim that the 80-year-old building’s structural soundness is suspect and when you couple that with it’s popularity among homeless folks, there are some very compelling reasons as to why the place ought to be leveled.

Read a very detailed account of what may be the last days of 508 Park Avenue the at “The Delta Blues” by CLICKING HERE:

Robert Johnson’s death is surrounded by mystery. He died in 1938, falling ill after playing a party and dying four days later. Some people say that Robert was shot by a jealous husband (Robert was not shy with the ladies). Others have said that Robert was poisoned by a jealous girlfriend. Whatever the reason, Johnson died at the young age of 27, and left a legacy of Delta Blues music that will outlive us all.

The Father of Rock ‘n Roll deserves a home, and what better place to call home than the birthplace of his recordings?