The Search For The Nation’s Greatest Undiscovered Blues Guitar Player is Back!

Guitar Center is pleased to announce the return of King of the Blues, the nationwide search for the next great undiscovered blues guitar player. With Sign-ups launching July 1, Guitar Center’s King of the Blues will feature competitions in over 200 Guitar Center locations across the country, culminating with the Grand Finals in Los Angeles this November. 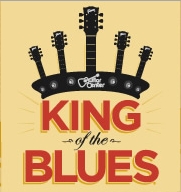 With “the Blues” being the foundation for nearly all of today’s popular music, the search for the nation’s greatest undiscovered blues guitarist is expected to unearth a goldmine of unsigned talent, some of whom are destined to become tomorrow’s legends.

Guitar Center’s King of the Blues champion will win an impressive package of prizes, including $25,000 cash, a featured spot in a Guitar Center ad campaign, along with a Gibson ’59 Les Paul reissue guitar, a $2,500 Levis shopping spree, a Marshall Vintage Modern 50 watt half stack, a Boss GT-10 Guitar Multi Effects Pedal, a feature in Guitar World magazine, worldwide distribution of their music in iTunes and more, plus endorsement deals from Ernie Ball, Marshall, Vox and Gibson. The five finalists will perform live at the grand finals featuring Joe Bonamassa. Additional regional, district and local prize packages will also be awarded, thanks to the generous support of Gibson , Levi’s, Ernie Ball, Marshall, Boss, Vox , Guitar World and Tunecore, all of whom are proud supporters of Guitar Center’s King of the Blues.