The movie is making quite the BUZZ in the guitar world… but what about the mainstream media?

Guitar World Magazine will have a feature story, as will most of the other guitar-focused publications on the newstand.

The NY Times posted their official review, and some of the snippets are worth reading…

IT MIGHT GET LOUD
GUYS WITH GUITARS, TRADING RIFFS AND METAPHYSICAL MUSINGS
By A. O. SCOTT

[Edit] The mystique of the electric guitar is as durable as anything in rock ’n’ roll. Whenever the power chord or the screaming solo seems destined for oblivion, it’s rescued and revived, either by a new generation of players or, as has been the case more recently, by a video game… [edit]

[edit]… The movie assembles a representative power trio made up of Jimmy Page of Led Zeppelin, the Edge of U2 and Jack White, most famously of the White Stripes. 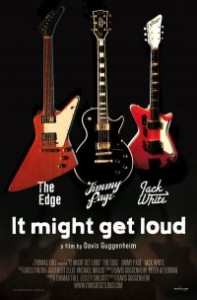 Interview and archival clips are interspersed with a summit meeting, half jam session, half graduate seminar in guitar metaphysics, on a soundstage loaded with all kinds of cool equipment. The guitarists trade riffs and thoughts and at the end make their way through an acoustic rendition of “The Weight.” It is both stirring and amusing to see three superstars strumming along to this song, originally recorded by the Band.. [edit]

Each man has a different relationship to the musical past, and also to technology. Mr. White, a traditionalist wary of digital effects and innovations, is nonetheless as much given to tinkering as the Edge, who finds lyricism in complicated sonic treatments and modifications, or Mr. Page, famous for playing a double-necked guitar [edit].

For rock geeks of any age or taste, the lore in this documentary will be catnip. But “It Might Get Loud” is more than a narrowly focused fan artifact. It gives those of us with tin ears and clumsy fingers a chance to linger in the presence of serious artists with formidable chops and big, if not always clearly expressed, ideas about what they do. And it will put you in the mood to listen.

You can read the entire review without [edits] by CLICKING HERE: