T-Bone Walker (born Aaron Joseph Walker) was born on this day in 1910. 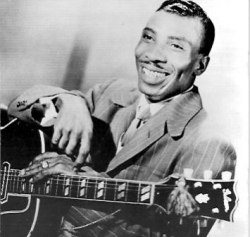 T-Bone was a blues guitarist and one of the pioneers of the electric guitar. His electric guitar solos were some of the first heard on blues recordings.

Most of T-Bone’s music was recorded from 1946–1948, including “Stormy Monday” which he recorded in 1947. He followed with “T-Bone Shuffle” and “Let Your Hair Down, Baby”, both considered blues classics.

Jimi Hendrix referred to T-Bone as his childhood hero.