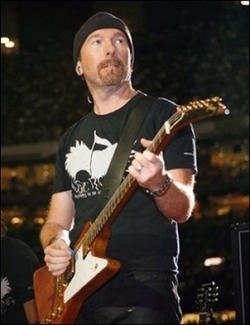 David Howell Evans was born on August 8, 1961. He is more widely known by his nickname and stage name The Edge (or simply just Edge).

Edge is best known as the guitarist, keyboardist, and main backing vocalist for the rock band U2. The Edge’s unmistakable guitar sound (clean, sharp, incisive, and cutting-Edge) is part of U2’s trademark. The characteristic and mesmerizing sounds and the emotions he expresses through them make him one of the most respected guitarists in rock and roll.