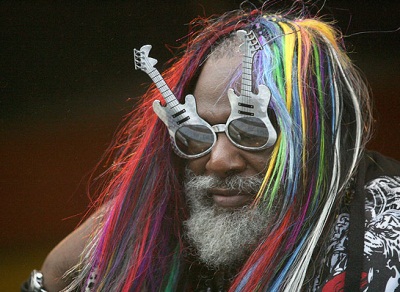 These have to be the coolest sunglasses ever!

I came across this picture while reading a story on CNBC.COM titled: 15 Musicians Gone Broke. (Thankfully, I am not one of them!)

Rock and Roll Hall of Fame inductee George Clinton is the flamboyant leader of the seminal funk groups Parliament and Funkadelic.

He is regularly mentioned in the same breath as James Brown, but despite his legendary status, he actually saw very little money for his efforts. His managers and business partners owned the publishing rights to his catalog, and therefore all the monetary compensation. So a flat broke Clinton filed for bankruptcy in 1984 in order to remain afloat.

Sadly, when he filed for bankruptcy, he overlooked the small matter of disclosing the songs he wrote between 1976 and 1983 as a source of possible future income, despite the fact that those years constituted his commercial peak. It’s estimated that this oversight has caused him to lose out on approximately $100 million in royalties.