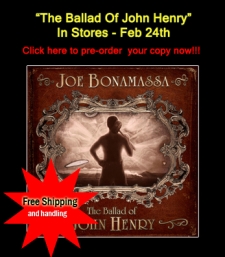 “The Ballad Of John Henry” is tentatively scheduled for release on February 24, 2009, via J&R Adventures worldwide.

Bonamassa’s last studio album, “Sloe Gin”, spent over 10 consecutive weeks at #1 on Billboard’s Blues Album Charts. He followed that album with “Live From Nowhere in Particular”, a double CD that rarely leaves my car.

Last fall, I took a road trip from Phoenix, AZ, to Flagstaff, AZ, to see Bonamassa LIVE at the Orpheum Theater. If you EVER get the chance to see Joe in concert, you have to go. He is an amazing talent and I can’t imagine any guitar player not enjoying his performance.