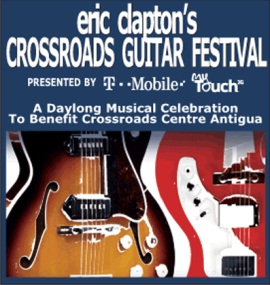 “I do it because I want to hear these players,” Eric Clapton says, during an exclusive interview (with Rolling Stone Magazine) announcing his third Crossroads Guitar Festival.

The first Crossroads Guitar Festival, in June 2004 at the Cotton Bowl in Dallas, was an unprecedented collection of guitar icons from blues, rock and contemporary music.

The sold-out show was chronicled in a 2-disc DVD that has since gone on to become one of the world’s top-selling music DVD’s, recently achieving the 8x platinum mark in the United States alone.

The Crossroads Guitar Festival 2007 was the second such concert by Clapton and was also staged at Toyota Park in July of 2007 and was filmed for a second DVD that met similar acclaim and achieved multi-platinum status.

Like the previous concerts and the best-selling DVDs from those festivals, this year’s event benefits the Crossroads Centre, the addiction-treatment facility founded by Clapton on the Caribbean island of Antigua in the early Nineties. “But it’s a selfish thing,” he admits delightedly. “I can go to one place and hear all of my favorite musicians in one day.”

Tickets for the Crossroads Guitar Festival will go on sale to the public on Saturday, February 20, 2010 at 10 AM Central Time via TicketMaster.

Tickets will be priced at $100 plus parking and applicable fees.