All of us at TheGuitarBuzz.com have been in the holiday gift-giving mood over the past few weeks and with the help of several of our loyal friends, supporters and sponsors, we have been able to give away some awesome prizes to the winners of our contests! And thanks to my good friend Andie at Universal Music Group, we have another giveaway contest to announce!
-GuitarDaddy, Editor, TheGuitarBuzz.com 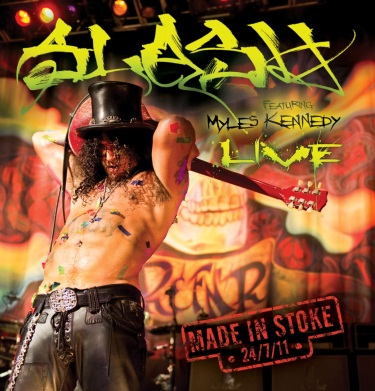 Eagle Rock Entertainment is proud to announce the U.S. release of Slash’s first ever live solo album, “Made In Stoke 24/7/11”. The double-disc CD, and a special-edition 2CD+DVD package (featuring five bonus tracks and an exclusive interview with Slash) in stores now!

The iconic, Grammy-winning rock guitarist and songwriter Slash has perfected the science of the six-string for over 20 years as an integral component of Guns N’ Roses and Velvet Revolver and as a hugely successful solo artist. On July 24, 2011, he made a very special visit to Stoke on Trent, England, where he was raised, at the end of the 2010-2011 tour in support of his globally chart topping and critically acclaimed self-titled solo debut.

Captured at Victoria Hall as part of an intensive world tour, this 21-song set is a celebration of a legendary career. Joined by Myles Kennedy of Alter Bridge on vocals, Slash ripped through cuts culled from his GN’R days, Velvet Revolver, Slash’s Snakepit, and his solo album, (including the single “By The Sword”). His band line-up included bassist Todd Kerns, drummer Brent Fitz and guitarist Bobby Schneck.

With favorites like “Back From Cali,” “Slither,” “Sweet Child ‘O Mine,” and many more reverberating the crowd-filled rafters, this proved to be one rockin’ homecoming.

ABOUT SLASH:
Slash is widely considered one of the greatest rock guitar players of all time. He has received countless accolades and awards including a 2007 induction into Hollywood’s RockWalk (located in front of Guitar Center in Hollywood) alongside his idols Jimmy Page and Jimi Hendrix. An original member of iconic rock band Guns N’ Roses, the Grammy-winning Slash helped the band create signature sounds like the guitar riff of #1 hit “Sweet Child o’ Mine” and “Welcome To The Jungle.” The band dominated the 1980’s and 90’s music scene selling more than 100 million albums worldwide and ushered in a decade of hard charging rock music. After leaving the band, Slash went on to critical acclaim in his personal project Slash’s Snakepit, and global success with supergroup Velvet Revolver. He has been widely sought after by the biggest musicians of all time, performing with everyone from Michael Jackson to Stevie Wonder to Ray Charles. Slash recently landed on the top of the charts with his first true solo album, Slash. In addition, Slash was just honored by the Hollywood Chamber of Commerce who named him as an official selection for 2011 to receive a star on Hollywood’s iconic Walk of Fame. In February 2011, he performed at the Super Bowl XLV half time show, seen by more than 106 million people, becoming the most-watched program in U.S. television history (Nielsen Co.). Slash is currently in the studio working on his second solo album due for release in 2012.

SO… WHAT IS THE CONTEST?
As I mentioned earlier, my good friend Andie at Universal Music Group has offered three CD’s plus a Grand Prize of “The Deluxe Double/CD + DVD of “Made in Stoke 24/7/11” as the prizes for the four winners of our contest!

ALL YOU HAVE TO DO TO ENTER THE CONTEST IS ADD A COMMENT TO THIS POST SHARING “ANYTHING ABOUT SLASH”! YOUR COMMENT CAN INCLUDE ANY PERSONAL EXPERIENCE YOU MAY HAVE HAD, A CONCERT YOU ATTENDED, YOUR FAVORITE SONG, YOUR FAVORITE LICK OR SOLO, ANYTHING AT ALL – AS LONG AS IT IS ABOUT SLASH AND/OR HIS MUSIC. THE 4 MOST CREATIVE COMMENTS (AS DETERMINED BY OUR INDEPENDENT PANEL OF SLASH-EXPERTS) WILL BE ENTERED INTO A RANDOM DRAWING TO DETERMINE WHO WILL RECEIVE THE GRAND PRIZE DELUXE DVD-CD SET! THE OTHER THREE FINALISTS WILL RECEIVE DOUBLE CD SETS!

The winners will be announced on CHRISTMAS DAY right here on TheGuitarBuzz.com!