When Rory Gallagher died from complications following a liver transplant in 1995 at only 47 years old, the music world lost one of its most influential and respected guitarists. Apocryphal evidence suggests that Hendrix rated Gallagher second only to himself and numerous respected guitarists cite him as having influenced their sound including Brian May, Eric Clapton and The Edge from U2. He appears in many fan-voted best guitarist lists and remains the personification of the razzled Irish blues-rock musician (From Soundunwound). 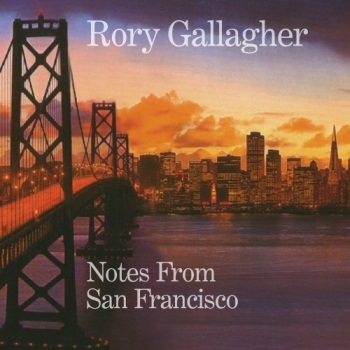 In 1977, Rory Gallagher entered a San Francisco studio and recorded a whole album’s worth of material. For the first time, the recordings from this session will see the light of day on Notes From San Francisco. The first disc features the results of this recording session. Disc Two consists of a massively energetic live concert recorded in December of 1979 at The Old Waldorf in San Francisco.

Incidentally, the album’s sleeve image is an original postcard Rory Gallagher posted to his mother while on tour. Gallagher would always send postcards back home to Ireland from wherever he was in the world. The Limited Edition Deluxe Edition of ‘Notes From San Francisco’ will include a set of personalised Rory postcards complete with ‘Rory Stamps’ which have been sourced from the original US company that produced them. Also included are reproductions of Rory’s hand written lyrics which were kept by Elliot Mazer.

The live album is a smoker – Rory holds nothing back here. The solo at the end of “Tattoo’d Lady” is three minutes of mind boggling, all out Rory Gallagher guitar bliss. Another treat is a great version of “Bullfrog Blues”. Very good sound quality for a 1979 live album and I’d rate the CD on par with the excellent live material from ‘Live at Rockpalast’ done during that period. Highly recommended! – Amazon.com Review