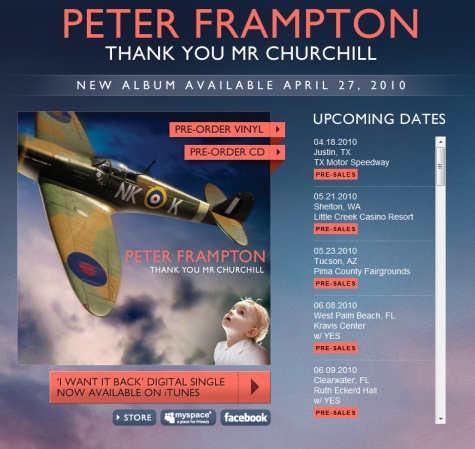 The 11-song set, co-produced and co-engineered by Frampton, features the legendary guitarist at his most incisive lyrically as he tackles the battles that wage within us and the outside forces that rage around us. His searing guitar work flows over every song, setting the mood. “This album is very autobiographical,” Frampton says. “It starts with my birth, which I thank Mr. Churchill for bringing my father back from the Second World War.”

Recorded at his home studio in Cincinnati, Churchill is deeply intimate, weaving tales of loss, love and redemption and the lessons learned along the way. Churchill also includes Frampton’s reflective take on troubling world events, including the Wall Street bailout (“Restraint”) and even the tragic case of Megumi Yokota, a Japanese girl kidnapped more than 30 years ago by North Korea (“Asleep at the Wheel”).

Frampton wrote all tracks on Churchill, penning many with longtime collaborator Gordon Kennedy.

Frampton remains one of the most celebrated artists and guitarists in rock history. At 16, he was lead singer and guitarist for British teen band, the Herd. At 18, he co-founded one of the first super groups, seminal rock act Humble Pie. His fifth solo album, the electrifying Frampton Comes Alive, is one of the top selling live records of all time.