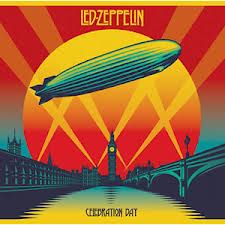 Led Zeppelin was, is, and always will be a driving force in the evolution of heavy metal. Their heavy, guitar-driven blues rock opened the world to an intriguing new sound, influencing generations of bands.

Now, more than 40 years after they first came together, they are still one of the most popular rock bands in history, with music that surpasses much of what is produced today. (Phoenix New Times)

I never had the opportunity to see Led Zeppelin live and in person…YouTube doesn’t count… so when the CD/DVD/Blu-Ray combo hits the market next week, I will be ready to BUY.

Celebration Day was filmed in December 2007 at the band’s storied reunion show at London’s 02 Arena. Here is the first official video to be released – check this out: