This is a follow up post to the press release about Kenny Wayne Shepherd’s upcoming CD that I posted a few days ago. If you missed that announcement, CLICK HERE. 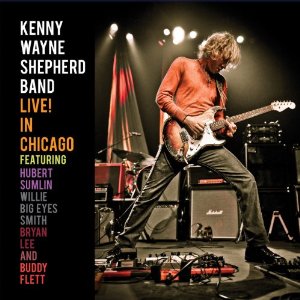 Many thanks to Loud & Proud for giving me access to “Live! in Chicago” before it’s official release on September 28th.

First of all, I have to say that this is one of the slickest CD covers I have seen in a long while. So much of today’s album artwork is thick on abstract but thin on communicating the artist and the heartbeat of the music. The cover of “Live in Chicago” gives you an instant visual of what you’ll get when you load this CD on you iPod.

I had my first taste of Kenny Wayne Shepherd live in Phoenix a few months ago when he shared the stage with a dozen other six-string icons during the “Experience Hendrix” tour.

The 4-hour marathon show included about a hour of Kenny across 3 different sets which were clearly the highlight for me.

In addition to his regular touring band (which includes two members of Stevie Ray Vaughan’s Double Trouble) Shepherd is joined on stage by legendary bluesmen Bryan Lee (who gave Kenny a break at age 13 by allowing him to share the stage), Buddy Flett, Howlin’ Wolf guitarist Hubert Sumlin, Willie “Big Eyes” Smith and the amazing keyboard playing of Riley Osborne.

The concert starts off with a lively version of “Someday, Somewhere, Someway“, a song that pulls you to the edge of your seat in anticipation for what lies ahead. Shepherd nails the Louisiana rocker “King’s Highway” and the the entire band gets involved to blast “True Lies” with equal blending of gritty blues and hard rock.

It’s a one-two-three opening punch that grabs you and screams “Wake up and listen…this is gonna be good”!

[Listen to “Somehow, Somewhere, Someway” to see what I mean…]

“Deja Voodoo” is a track where Kenny bares his soul and shows his love for down and dirty bluesy rock.  It’s my favorite track.

B.B. King’s “Sell My Monkey” sounds like it is straight from the jukebox in 1957. It’s bouncy and fun…as you would expect.  Shepherd plays a slide-heavy version of Buddy Flett’s “Dance for Me Girl” that drips with emotion. There is an excellent cover of Jimmy Reed’s “Baby, Don’t Say that No More“.

Next up is a slow blues take of Ronnie Earls “Eye to Eye” which includes some great harmonica work. “How Many More Years” is a Howlin’ Wolf cover that rocks the 12-bar blues with KWS playing the signature lead licks.  “Sick and Tired” has a traditional R&B vibe that has been KWS’d to the max. I found it impossible to sit still while this one was playing.

Kenny plays tribute to some early blues in Hubert Sumlin style with his electrifying versions of “Feed Me” and “Rockin’ Daddy.”  Then comes the thick and heavy “Blue on Black“. This one will blow you away.  I found my head nodding with the beat as Kenny played his solo and before I realized it…my whole body was shaking.

The album closes with a hard driving cover of Slim Harpo’s “I’m a King Bee” which is definitely “blues rock in your face”. It’s very powerful and meant to be played loud — as if you are there in the front row.

Live! In Chicago is a must-have release for Kenny Wayne Shepherd fans and will serve as a quality introduction for the unfortunate few who have not yet heard his dynamic chops. And for everyone in between…this should push them over the edge to become serious KWS fans!

In Kenny’s own words: “Usually a live record is just live versions of all of your old stuff, but this collection is a diverse combination for the fans.”