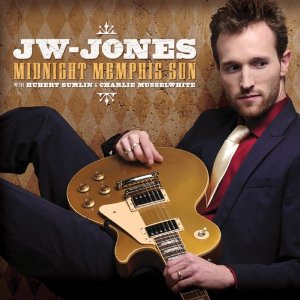 This release has a strong emphasis toward traditional blues. It was mostly recorded in Sun Studio in Memphis, TN. Veterans Charlie Musselwhite and Hubert Sumlin guest on three tracks each.

JW-Jones has been proclaimed as “one of the country’s top blues guitar stars,” by Canada’s Globe and Mail newspaper; and his guitar prowess has already been recognized by a number of celebrated fans in the U.S.

JW-Jones has performed at festivals across the U.S., Canada and Europe with guest Charlie Baty and was included on Guitar World magazine’s CD, Guitar Masters, Volume 2, which placed him in the company of B.B. King, Jimmy Page, Jeff Beck and Carlos Santana.

[Listen to a sample of “Born Operator” from the new CD]

“I hope Bernie Madoff actually gets to hear that…” – GuitarDaddy

No doubt, JW-Jones is the real deal and “Midnight Memphis Sun” is JW-Jones at his best. If you need more proof – watch this PROMO VIDEO!