‘Twas the night before the Oscars…. and all through the house…

While somebody out there knows who will win the Academy Award for Best Actor tomorrow night, I assure you it’s not me.

But I do have my favorite and I will be rooting big time for Jeff Bridges.

His incredible performance playing the troubled country singer Bad Blake in Crazy Heart (CLICK HERE for more about the movie) was all I needed to join one of those movie download sites so I could replay it over and over before the DVD comes out. 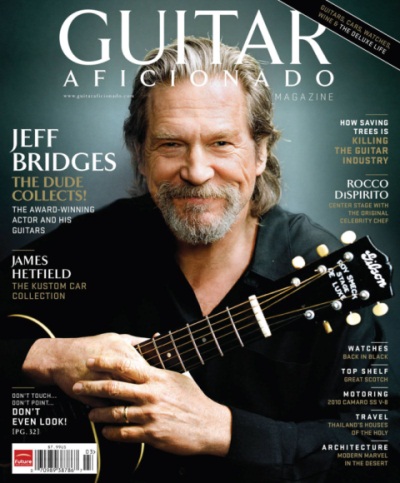 Jeff will be on the cover of the upcoming issue of Guitar Aficionado.

Referring to his career as an actor and his passion for music, Bridges says, “I dug what an actor did, but it took me a while to feel it, to truly appreciate the craft and the preparation. Plus, I was still playing music a lot, and I guess I had a hard time choosing: was I an actor or a musician, or could I be both?”

As for his Crazy Heart character, Bridges explains, “Bad Blake is one of those ‘Dude’ parts. It’s the kind of part you know you’re born to play. Bad’s the last of a breed, one of those guys they just don’t make anymore—like Kris [Kristofferson] or Waylon Jennings or Merle Haggard. The role was such an open canvas for me to work with. And hey, the chance to actually do my own singing and guitar playing on film—what a trip!”

I have always admired Jeff as an actor, but as I watched Crazy Heart I kept saying over and over… “This Guy Missed His calling!”. Honestly, he did not miss a thing. He hit the mark of perfection with this performance dead-on-perfect.

The DVD will be released soon. There soundtrack CD is available today.