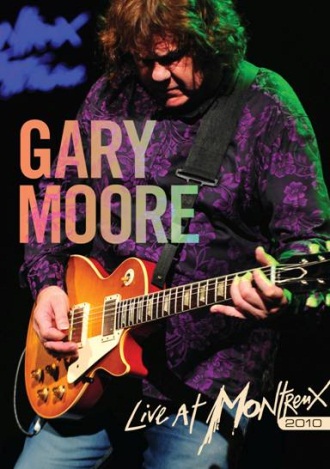 Eagle Rock Entertainment will release, on September 20, the very last live performance in the life of acclaimed guitarist/singer/songwriter Gary Moore. Live At Montreux 2010 strikingly shows a major return-to-rock for the musician who spent years exploring the blues. In fact, in the last days of his life, Moore, who died on February 6 of this year, was working on a new rock album.

What makes this release so compelling is the inclusion of three never-before-released gems, “Days Of Heroes,” “Where Are You Now” and “Oh Wild One,” that he previewed for the Montreux audience and had fully intended to put on the album he was writing and recording at the time. The rest of the set is heavy on the 1980s rock he pioneered solo, as well as his late 60s/70s work with Phil Lynott in Thin Lizzy and Skid Row.

And, of course, some blues.

Gary Moore was born in 1952 Belfast, Ireland. Heavily influenced by Fleetwood Mac’s Peter Green, he joined Skid Row (not to be confused with the American band of the same name) as a teenaged phenomenon in 1969 for three albums before going solo, joining Thin Lizzy, and going solo again. His hit single “Parisienne Walkways” catapulted him into the hearts and minds of discerning music lovers around the globe and subsequent forays into Celtic (Wild Frontier, 1987) and blues (Still Got The Blues, 1990) preceded an album with Ginger Baker and Jack Bruce (BBM, 1994). Much more blues would follow, most notably Power Of The Blues in 2004. Through it all, he maintained the highest level of musicianship and became revered for his constant searching and the redefining of his own artistry.